One Year On: A Climber's Lucky Escape

The survivor of an avalanche says the near-death incident a year ago hasn’t stopped him from climbing, but admits he will always be “just a little nervous” on each trip into the mountains.

We spoke to Tom, of Christchurch, just days after the incident last year as he recovered in hospital, and we caught up with him again this week as he reflected on the year that has been.

Tom, and his climbing partner of six years, were caught in an early season avalanche on June 14 last year as they climbed the south face of Mt Alma in the Two Thumbs Range in Canterbury.

The pair had changed their original plans from a climb in the Arthur’s Pass National Park due to fresh snow and others pulling out, and opted a climb of Mt Alma, Tom told us just days after the incident last year.

They had chosen Mt Alma as they felt it was east enough of the Main Divide to miss most of the new snow and hoped for firm conditions on the northeast aspects. They decided to leave their avalanche gear behind as they figured the snow cover would still be very thin.

On the morning of June 14 last year, they broke camp and set off at about 6.30am, after deciding to attempt the northeast ridge. The snow cover was generally thin and in places they were occasionally post-holing down to the rocks below. 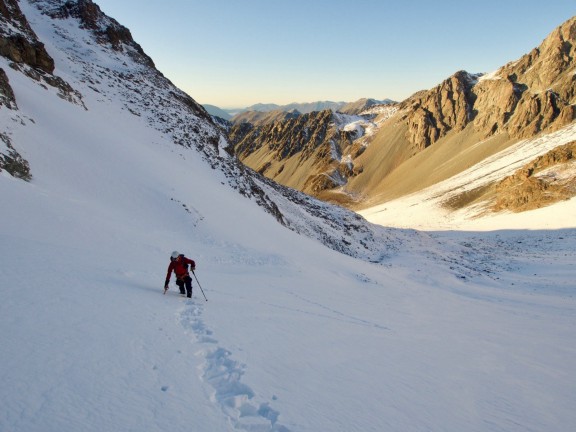 Heading up the slope below the saddle, about 20 minutes before the avalanche.

The pair put crampons on half-way up the slope because they were occasionally encountering an icy layer approximately 20cm-30cm below the surface.

Tom was following his partner, about 5m behind, when he heard a ‘whumph’ sound. Both climbers began sliding.

Tom rolled on to his front in an attempt to self-arrest with his ice axe, but his foot got caught in the debris and he started to tumble out of control. His head was under snow and at times was unable to breathe.

Using his arms, Tom was trying to stay near the surface of the avalanche, essentially attempting to ‘swim’. Eventually he was able to gain some control and stabilise himself on his bottom with his feet downhill.

Hitting another large rock he lost control again and began to tumble, but for a second time he managed to stabilise himself and get back into a sitting position, riding out the avalanche until it stopped some 300m below where Tom had been prior to the slope releasing.

Thankfully, Tom’s partner, who was also caught, had managed to get himself out of the avalanche much higher up, using a ‘barrel roll’ technique. He watched Tom carry on down tracking his position, knowing he’d be down as quickly as he could to rescue him.

"Once the avalanche stopped, I noticed that I was bleeding from my leg and saw a large cut with skin hanging off. I yelled up to my partner that my leg was hurt and we may need to pull the PLB,” Tom told MSC last year.

Looking back up the avalanche from where they stopped.

This week, Tom told us, “I guess the obvious thing was we should not have taken that route and should've been more aware of the conditions and the avalanche danger”.

“Now I have a bit more awareness on the complexities and more knowledge of the kind of signs and stuff we missed - there had been a lot of wind in the few days before our trip, and it was really cold too. One of the coldest trips I’ve done.

“When planning our route we should've stepped back and thought about it rather than thinking it wasn’t going to be a problem,” Tom said.

Since the incident, Tom and his climbing partner have been on many climbing trips, with Tom out climbing just two months after the incident, and he has already been out this season with the hopes for more trips in the coming months.

However, Tom says "I am just a little nervous [on each trip] and always will be.” 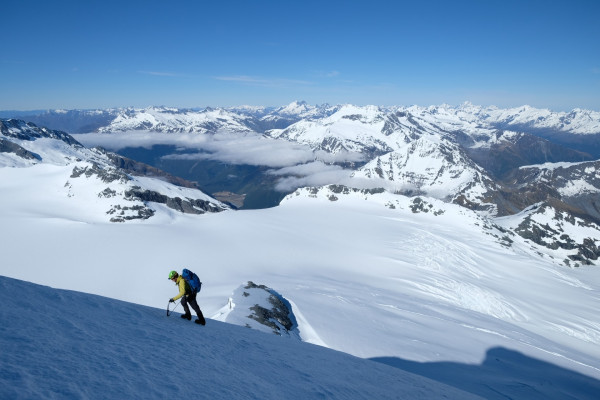 Tom on the southwest ridge of Mt Aspiring in October last year. PHOTO/SUPPLIED

Since the incident, he does things a little differently when it comes to trip and terrain planning, and he hopes others will do the same.

“In general, don’t assume you know what the conditions are and to just keep being observant and questioning your assumptions.

“I also think it’s important, especially in the early season, to keep track of what the weather has been doing before your trip, not just the forecast of what it’s going to be like. Try and get an idea how cold and windy it might have been,” he says.

Before the incident, Tom had not done any formal avalanche-related courses, but he had been to many avalanche awareness events. Since June last year he has completed one formal course with more scheduled, and encourages other alpine climbers to do the same.

This avalanche incident was reported via the NZ Avalanche Advisory public observation tool, you can see the original observation here.

Some notes from us for a safe season

From 1999 to 2018, there were 742 reported avalanche incidents in New Zealand’s outdoors, including 27 fatalities. Travelling safely in avalanche terrain requires three essential components - the skills, equipment and forecast. You can find out more about these here.