A lesson with every adventure | Currie Family Tips

For world winning multi-sport Kiwi champion Braden Currie and his wife Sally, getting outdoors with their two children is important family time but is also a form of growth for them all. Sally shares with the NZ Mountain Safety Council their recent adventure to Mueller Hut, in the Aoraki/Mt Cook National Park, from how they planned it to the mental and physical highs and lows that resulted in another memorable Currie family adventure.

A reflection on NZ tramping from the Currie Family

The beauty of New Zealand right now, is that we have the country to ourselves and with each month that passes I feel like more and more people are starting to realise just how good their own backyard is, and how easy it is to plan a trip and enjoy the outdoors.

One week out from Christmas we wanted to tick off an adventure as a family. After a big year for Braden racing and with plenty of travelling challenges, plus the kids just finishing school, we inevitably felt pretty worn out. But what is more important than sleep for us as a family is starting the summer holidays on the right foot and re-connecting as a family. For us there is nothing better than heading into the outdoors. It’s the most efficient way to get back to basics and have a bit of a reality check on what life is about. 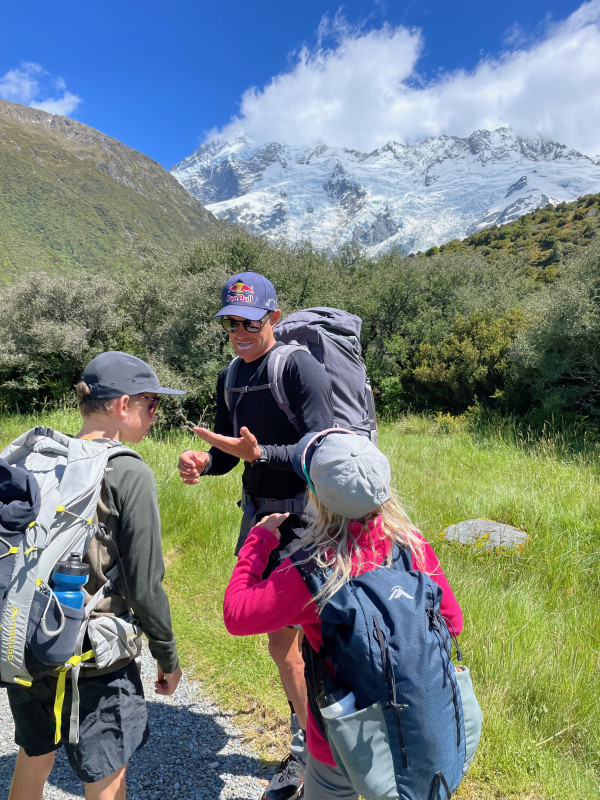 For years we have talked about doing the Mueller Hut Route. Although on the surface it’s not a huge feat, the reality of finding the time, booking the hut 10 days in advance, and having both kids capable enough of making it made it feel like a huge feat for us. I hadn’t done the Mueller Hut Route myself but Braden had been up once before. Tarn is 13 years old and is capable of far more than I am these days, but he had never been to Aoraki/Mt Cook National Park. Bella, our daughter, is 8 years old and  I knew the big challenge would be Bella. But after many similar experiences I felt like she would be capable of doing it, but that there might be a few mental challenges climbing the longest staircase in New Zealand – that's about 2200 stairs. I knew once we hit the scrambling part of the track, that she would be in her element. Off the beaten track is where she prefers to be.

We used the Plan My Walk app by the NZ Mountain Safety Council to check out the weather, find out more about what to expect and to pack what we needed.  Although some might think we are reasonably savvy outdoor family, we have forgotten plenty of essential bits of equipment,  clothing and food over our time in the outdoors. I think this is because of our perception of the trips we are doing with kids now, relative to what we used to do in terms of difficulty in our 20s makes us a bit blaze.  It’s not a good thing as there are so many more things that can go wrong when you are taking kids into the outdoors. It’s not just you anymore and even if you think you can deal to most scenarios by yourself, add in a few extras and it’s a whole new ball game. Planning well is crucial.

I recall one trip up the Ahuriri Valley when Bella was 5 years old where we forgot all of her clothing and the entire food bag. I thought Braden packed it and he thought I did. We ended up eating dry wraps with a shared bag of Absolute Wilderness butter chicken for dinner and then fasting for breakfast on the 10km mountain bike back to the rafts.

We all enjoyed the trip but we would have enjoyed it more if we remembered everything. The new Plan My Walk app is pretty awesome in this regard. It definitely simplifies the process of planning to have everything in one place and a simple checklist in terms of gear to act as a reminder for blaze types like Braden and I. It is also good practice for the kids to use the app. The biggest thing we can hope for, for our kids in life is for them to develop independence and accountability. Not having to be told or instructed as such by mum and dad actually helps the process. Instead, the kids are able to view the trip we are doing, read the maps, understand the weather that is coming, and check off all the gear they need. It’s pretty cool and a huge step forward in terms of being able to plan better and access information about what trips we could do.

But when we pulled up with the caravan at 11am to the carpark in Aoraki/Mt Cook National Park and I looked up towards the towering mountains, fast-moving cloud formations and the impending destination over 1000m up, I realised that taking these things seriously is a skill that might be worth finessing.

Both Braden and I have spent a lot of time in the mountains. We were both mountain people when we first met. We both spent time in Europe ski touring and mountaineering and rock climbing. And there is no doubt that we have both had a couple of instances where we could of lost our lives in the outdoors many years ago now, but the memories are still fresh. We know that the mountains do not forgive! And taking kids into the mountains adds an entirely new element.

So even though the Mueller Hut Route is a track that tens of thousands have people have done over the years, we both still knew it is one to not treat indifferently.

I made sure I checked what Bella had packed before we set off. She used the Plan My Walk gear check list but as it was a warm summers day she discounted the need for socks, a beanie and a jacket. I think a really good thing to remember is that kids live in the moment. If it’s hot they will not pack anything warm as its hot outside.

Tarn being Tarn had more than enough and ended up lending me his socks and a pair of pants when we got to the hut. Still room for progress on my part, checking in on Bella’s stuff but forgetting a good portion of what I needed. 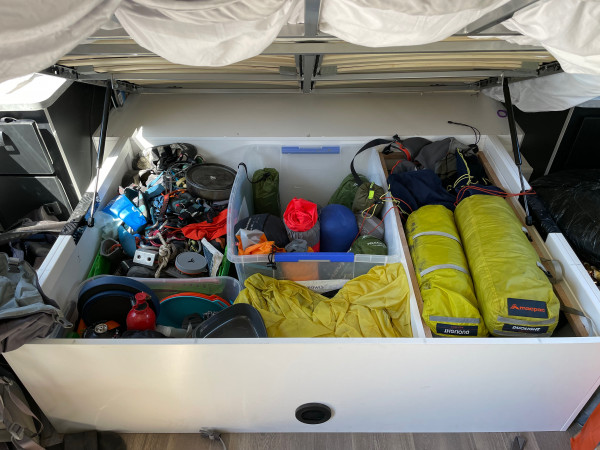 And so off we set. It was the first time with a heavy pack for a while and I started to think “what have I signed us up for?” This is going to be a pretty tough walk. Bella started to moan as soon as we hit the stairs. She was carrying a pack for the first time.

The predictable dialogue began. Braden being Braden started by ignoring her and then tried to work with her when he realised that if he didn’t that we might be hiking for twice as long as we needed to be. He then became defiant and told her that we would turn around and go home if she didn’t want to do it. I was concerned she might take him up on it, so after holding my breath for 30 seconds, I decided to strategically see if I could seal the deal with a good cop bad cop move. I offered to carry her pack as well as mine.

Good cop, bad cop worked, and we both gave ourselves a silent “that was lucky” kind of look as Bella proceeded to have a rapid attitude change and proceeded to walk and run up the hill faster than all of us. She was on an endless high from that point in time until we arrived back at the caravan the next day. Every time we have a win like this, and we see both our kids enjoy their time outdoors, and how chuffed they are with themselves, you realise that all the effort (and sometimes the frustration) is worth it. Every scenario they will try and test you in a different way and you must outsmart them, for their own good. The physical and mental challenges experienced in the outdoors make us tougher and more resilient humans, and both Braden and I believe that if you can raise resilient kids then no matter what they will live better lives because of it. 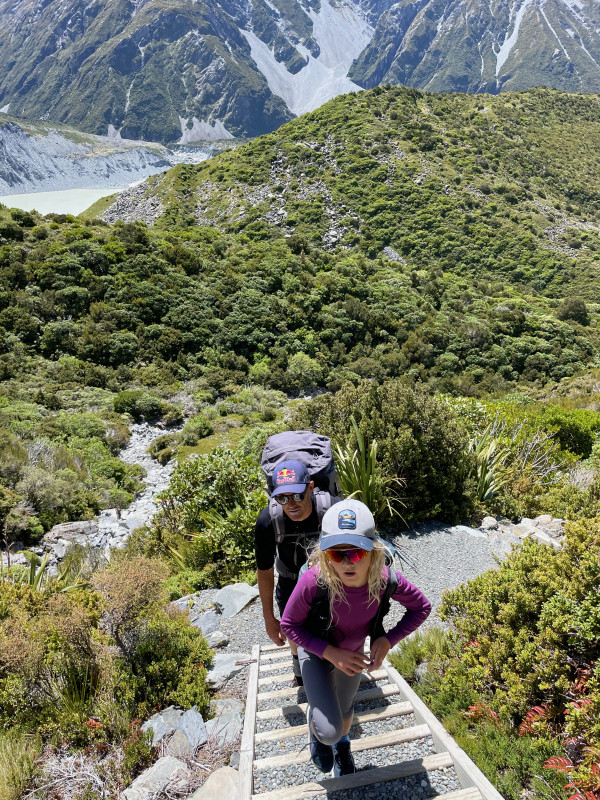 When we reached the ridge, it was blowing its head off. There was no time to take in the views. It was time to get to the hut. I have to admit, if you planned this particular trip badly, the consequences would be real. As we rounded the most exposed section of the ridgeline, we could see the hut. It was about 2.30pm and the snow leading up to the hut was soft and slushy. This section of the track was protected from the wind and the kids were so happy to see snow. They started with snowballs and running to the hut. I was trudging along behind with two packs and I stepped in the snow proximate to a rock. My foot sank through about a foot of snow and I landed all my weight on a loose rock. I thought I heard a crack and had to take a few deep breaths as I felt pain radiate through my ankle. My ankles have always been the weakest part of the chain and I have had this happen many a time before. But I was lucky this time. It wasn’t sprained or broken. I did think about what could have happened if I had broken it for the next few hundred metres however. What an epic trip it would have been. I think I would of needed a heli to get down as the track itself is a steep scramble on loose terrain for at least half and the rest is steep stairs. I was dreading the down with two intact ankles, let alone one disabled one. No matter how smooth the trip has been there are always moments in the outdoors where you can’t help but think what can go wrong if you make a mistake.

Lucky for us however, we had a hugely successful trip and we were all stoked on our achievement. The hut was awesome and the track itself made sure we all felt like we had earned our  Xmas dinner the day after we got back. Bella’s attitude change early on in the trip also had a sense of permanence to it. Like every trip into the outdoors as a family, we will treasure it forever and a day.  Braden’s life as an athlete provides us with so many opportunities to travel together, but the reality is that Braden is always working. And there are so few times when we can fit things like this into his schedule. This is the reality for most families, but my only message is, if you have a window, even if it’s only 24hrs then make it happen. It’s worth the effort!

Images and story: The Currie Family