I have been lost in the bush a couple of times. Some intentionally*, some not so intentionally. I have also learnt that ‘lost’ is a sliding scale for people. While I am comfortable now just knowing my general location, I have also watched people start to get very concerned the moment the GPS loses its lock on satellites.

However, the easiest way to ascertain your location, is never lose it in the first place. So, let’s go through a couple of tips and tricks that have served me well over the years.

Guest Blog from Kerry Adams: Kerry has an extensive background in firearms and the outdoors, leaning a lot towards safety education. As one of the NZ Mountain Safety Council Firearms Instructors, he is constantly in front of new shooters and hunters, and finds himself driven to help however he can to get them started. While he doesn't get out to hunt as much these days (young kids) - he is at the range most weeks, setting up firearms for clients as well as teaching them how to shoot them. He has previously been involved with the Deerstalkers, LandSAR and most recently FieldShooting NZ. You can check out more of what he is up to over at goodblokes.nz - say hello!

Have the gear and understand how to use it.

It’s all very well having the latest GPS touchscreen unit with all manner of fancy functions, but if it’s not set up right, and you don’t know how to set it up, you are going to have a problem. In fact, I have personally observed two guys manage to get themselves ‘lost’ while staring at a GPS screen. I could sense the confusion starting to build as a track junction that was expected on the map wasn’t turning up. After a couple more hundred metres of following the same track and the GPS not matching up with what the lads could see on the ground, I did a quick double check on my Topo50 Map – and suggested we were at least 500 metres away from the point they thought they were. The reason? As far as I can tell, the GPS unit was getting a good signal, and the issue was more than GPS Drift – so either the maps were wrong, or the DATUM setup (how the map is ‘projected’ onto the globe) in the unit itself was incorrect. It’s important to understand that your brand-new unit, especially if sourced from overseas, may not be correctly set up out of the box.

I have also been walked around in circles by my Garmin Watch – it had a good lock, knew where I was and where I was meant to be going – but seemed to be trying to walk me in almost random directions to get there. The issue? I was off track, and the unit was trying to lock me onto a road for travel. It couldn’t decide where the nearest road was – so I was being sent one direction and then another as it tried to figure it out. I turned off the lock function, it gave me a direct direction to where I was trying to go, and the rest was easy.

The lesson: It's important with navigation, whether it’s a sense you are not where you think you are, or a sense that the equipment is not doing what it should be, that you stop, take stock of the situation, fix what needs to be fixed and then move on. There is no point in simply continuing to walk and hope something improves with the situation. It might. It also might not. 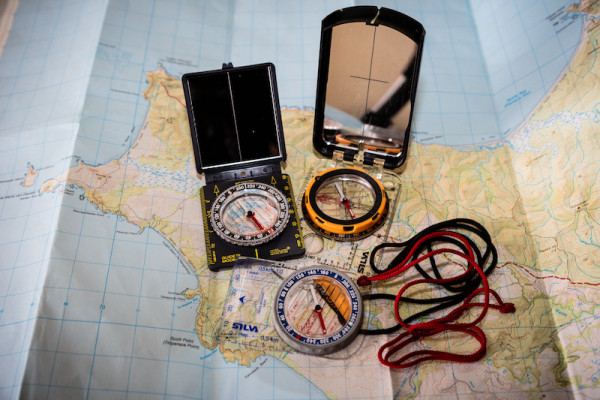 Redundancy. Back up the Back up.

A few people are still hesitant to utilise a GPS for navigation. The theory being, that (much like a phone) if the battery dies, you are stuffed. So, carry spares. I vacuum pack (so they don’t get wet) spare batteries, and try and select my various devices (GPS, Headlamp, Torch, etc) to all use the same batteries – so I can swap them around if need be. AA’s are my friend!

Sure, you might lose a signal under dense canopy in the bush, but most modern units can utilise GPS, GLONASS and Galileo Networks (essentially, different satellite networks) – and it doesn’t really matter to me if I occasionally loose lock – it’s back within five minutes at worst. More than likely, if, and it’s a stretch, I lose it (though I tend to tether things to my pack or myself) I have other options as backups. Namely – my watch (it’s a GPS as well) and – a map and compass. Often these days, I just use my watch to give me a TOPO50 Grid Reference, which I then can ‘map’ onto my paper map (laminated to stay dry) to give me a bigger picture. I mark the map every half hour or so to track my position, and then carry on my merry way.

If that goes down, I also likely have my phone (turned off) in my pack. 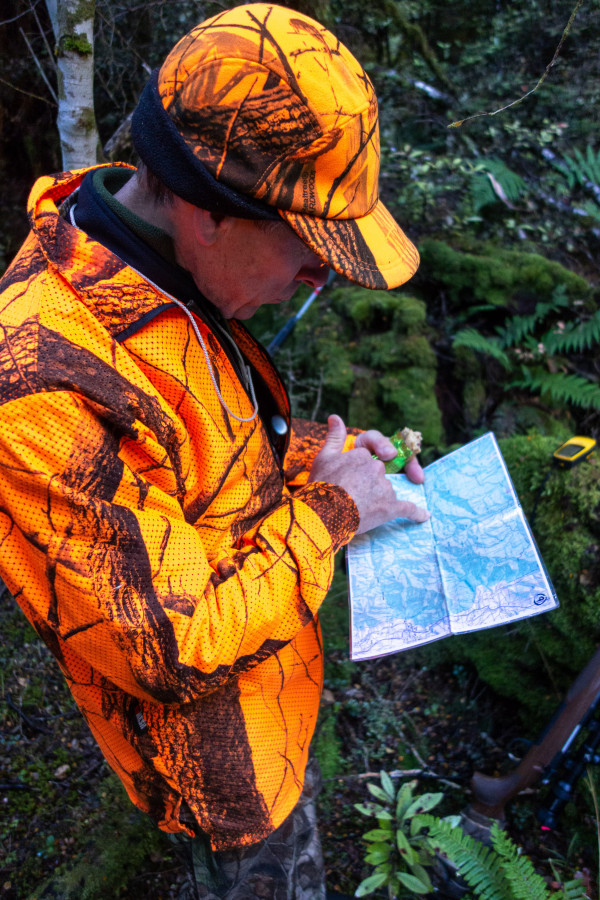 Modern smart phones are very, very powerful devices. However, a couple of important considerations need to be made if you are looking to use them for navigation.

If it’s your primary source of navigation – then you don’t want to also be using it to take photos, record video and the million other things a modern phone can do. If it’s on, it’s using battery, if it’s on, and you don’t have reception – the GPS will likely still work – but – two things will happen – firstly – it will drain battery fast, and it’s seeking out cell towers to talk too, and there is the potential that your maps won’t work – as many systems download maps as you need them. No connection, no map. You might know ‘where’ you are – but that ‘where’ will turn up as a blank white page.

I have Topo50 Maps downloaded onto my phone. This means, if I have no connection, or, to save power, put the phone into airplane mode – my maps are still right there, functional.

Look over your shoulder – and up – and around you.

I have watched people navigate dense bush with their faces glued to their GPS units. This is a good way to run into things – like branches or bluff yourself by walking right up onto a cliff edge. Apart from the obvious safety issues of not having much situational awareness going on, looking up and around your environment also gives you a sense of location and direction, that can be very helpful should you need to backtrack you path.

Keeping your head in the game is an important part of navigation – while many hunters and backcountry explorers won’t know exactly where they are all the time, keeping a general sense of location in your head goes a long way to never getting lost in the first place.

A mental cue I have used a lot over the years is imaging, in my head, the map, and myself as a little dot on that map. As I move, so does the dot. Just like many of us have likely experienced while playing a computer game that has maps on it. This thought process keeps my progress in the bush active – while the main focus might be on stalking or navigating tricky terrain.

Keep your head in the game, keep your situational awareness up, stay safe, and have fun!

Thanks for sharing your tips and photos Kerry! New Zealand's outdoors provides exciting opportunities for all types of people and everyone has their own way of preparing for it. We hope readers can take away a few tips of their own from this or feel free to share your own tips with us.

Want to learn more from others?

*Kerry was on a bushcraft course was set up to 'get lost' by the course instructors as part of the training.