Have the confidence to speak up

Speaking up can feel awkward when tramping in a group, but Abbie Law wishes they had done that before attempting the Tongariro Alpine Crossing (TAC) recently.

To know each of your tramping partner’s limits is to know that you can make a well-informed and safe decision when out on New Zealand’s tracks. Law says to prevent rushed decision making, talk “openly and honestly” with everyone in your tramping party before and during the trip, a lesson she had reinforced after her tramping group made the tough decision to turn around in cold windy conditions.

The Tongariro Alpine Crossing (TAC) has the highest number of search and rescues of any track in New Zealand. It is a challenging day trip that travels 19.4km right through alpine terrain and an area of active volcanoes.

Although beautiful, it can be dangerous if you are not fully prepared to enter the harsh alpine environment.

Extreme weather, rough terrain and the long distance are contributing factors to the high number of search and rescues.

Abbie, her partner and a friend learnt a lot about sensible decision making after abandoning their attempt of the TAC via the Northern Circuit due to bad weather in December last year.

It was meant to be the couple’s completion of their seventh Great Walk. But the TAC can be unforgiving when the weather turns, and Abbie says they are proud they made the right decision to turn back despite the feeling of disappointment. 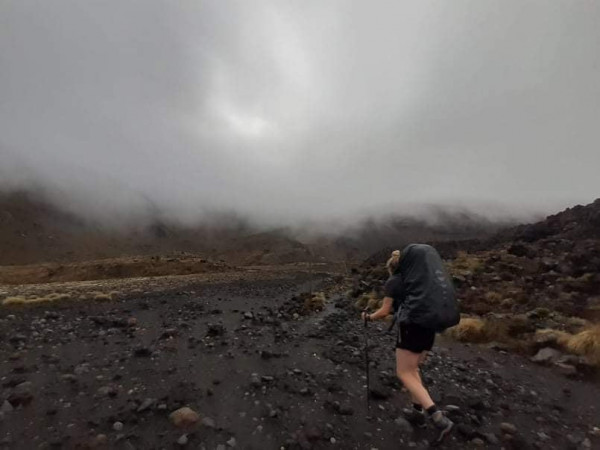 Abbie Law and her tramping party made the decision to turnaround after striking bad weather on the Tongariro Alpine Crossing (TAC). PHOTO/ABBIE LAW

The trio were the first to leave the Waihohonu Hut at about 8am after the Department of Conservation (DOC) warden suggested they get on the track before the weather turned bad.

As they set off, the weather was fine with some cloud hovering, but further on they stopped and layered up as the strong cold wind began to set in, she says.

“We had all the right gear; thermals, woolen socks, hats, gloves, waterproof jackets and a PLB.”

After two and a half hours of walking it became obvious that the group couldn’t continue on in the worsening weather and a decision needed to be made.

“It got to a point where it was super cloudy and so windy and cold,” Abbie says.

Having to make an unanimous important decision on the spot in cold conditions was the biggest challenge, she says.

“Because I hadn’t heard of anyone turning back around [on the Tongariro Alpine Crossing], it didn’t feel like that was a thing to do.

“The problem was it was longer to walk back to the hut than to carry on which played with our minds, and our friend really wanted to continue on. . . we just didn’t know each other’s limits.

“We felt we had to make such a big decision right there and then, and did not want to let each other down at the same time.

“But by the time we had all decided to turn around, the visibility was so poor on both sides, it seemed like it was a bad decision to continue on either way, but returning to the hut was the safest option,” she said.

Another group who had caught up to the trio decided to push on ahead, but as it later turned out they also decided to abandon their plans and turned around not long after Abbie’s group did.

“We did want to carry on as the other group had gone on ahead, but once we knew that they turned around, that made us feel better,” she says.

“It was hard to give up on and we felt really disappointed.”

For their next tramp, Abbie said they will have those discussions about their personal limits and comfort levels beforehand, to avoid wasting valuable time if they need to make a quick decision.

This type of situation is very common, and it can go either way.

Often, we hear of stories where the group has decided to push on while knowing deep down it’s a risky call. These situations can be  really dangerous, you can’t bank on luck every time.

Making smart, conservative decisions, in these higher stress times requires courage and strong rational thinking, especially if other people present are deciding to carry on.

The influence of other people is a well known heuristic trap, known as Social Proof, which we frequently see people impacted by.

Avoiding such traps can be really hard as our brains are wired to make thousands of instinctive decisions without much cognitive thought process.

Often by following others, we are safer (hence the term 'safety in numbers') but this is not always true.

The more open you can be about the expectations of everyone in the group before you leave, the better prepared you are all likely to be. It also helps to build an atmosphere of trust to make everyone feel more confident to speak up during your trip.

Unfortunately, all too often groups end up separating during the walk and this has led to hundreds of search and rescues, and some fatalities.

Read our in-depth report on the Tongariro Alpine Crossing, and the steps we have taken to improve safety on the track to minimise injuries, search and rescues, and deaths.