In this story, MSC Operations Manager Nathan Watson shares his experience of breaking a boot, and finding a new one, deep in Fiordland.

“So, you think it can be fixed? I’m going away on a 10-day trip next week and it’d be great to have it back.” As I waited for an answer the smell of leather, glue and shoe polish wafted around me, a sure sign I was in the hands of a pro. The older gentleman looked up “yea, we can sort that, I guess you’ll need the sole on won’t you!” He was correct. Ten days in Fiordland would require a working boot, and the sole on my left one needed some attention before I was confident it’d stand up to the trip.

A week later, with the visit to the shoe repair shop an almost distant memory, we pulled up at the end of the Hollyford Road, a dubious forecast ahead, but with a solid plan and enough food to last 10 days. Plan A was to tackle the Hollyford/Pyke Loop, if the weather allowed. Springtime is not the ideal tramping season, but with families and jobs you take what you can get. We were used to this time of the year, and hard 10-day trips were to our liking. With heavy packs, and a new sole securely attached to my left boot, everything felt just right as we set off.

It was not long before my optimism began to waiver. Day one was a relatively short and easy task, given the travel down from Wellington, and somewhere around Swamp Creek the ominous flapping began. ‘That’s a strange sound I thought’. A light ‘flap’ as I took every second step. Oh no, it was the sole on my boot. The right one. Flap, flap, flap.

At this point, early on into day one, you can probably imagine how I was feeling. Frustrated, of course. The left sole was fine, of course it was it had just been fixed. And as the shoe shop repair man had said at the time “the right one looks fine”. I had agreed. But now it wasn’t, and we had 9.5 days of challenging tramping ahead. What on earth do we do now.

Luckily, we don’t set out on these trips lightly, and there was no way I was turning around, not yet at least. Fearing a major shoelace malfunction, I always carry a spare, and so the Jamaican-coloured spare shoelaces (the only colour I could find) that had lived in my pack for several years were finally hunted down and for their first time applied to my boot, just not as intended. But it was obvious they alone would not last 9.5 days, so in true bush engineering fashion they joined several wraps of strapping and duct tape to form a highly dubious ‘emergency boot wrap repair’. 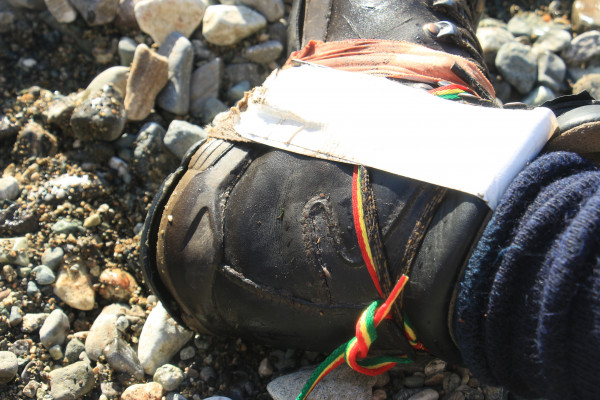 The problem with my repair job wasn’t that it lacked quality, in was pure physics, a shoelace, strapping tape and duct tape were no match for the elements. Within a day the rocks had won, helped along by the heavy rain. The boot did hold up quite well, to be fair it had to put up with walking half-way down Lake Alabaster, literally submerged in the lake the entire way there and back. Our plans of a Hollyford/Pyke Loop were dashed, in part by the weather, and in part by the boot.

But we were not giving up lightly. Remember, 10 days off, we had to use them well! So, to the ocean it was, Martins Bay Hut was the new goal. I had my crocs, I would wear one boot and one croc if I had too!

Then something really unexpected happened. Our luck changed. As the sole was on it’s last millimetres of fragile attachment to the toe of the boot, literally moments of life left in it (but by now well past serving any real function at all) and with the last remaining threads of strapping and duct tape, I found a replacement boot.

Right there. On the side of the track. Lying alone, in the middle of Fiordland. A new (used, but to my eyes ‘new’) boot. Size 9, perfect. Right foot, even better. Like Cinderella, it fits! Suddenly I was back in the game! 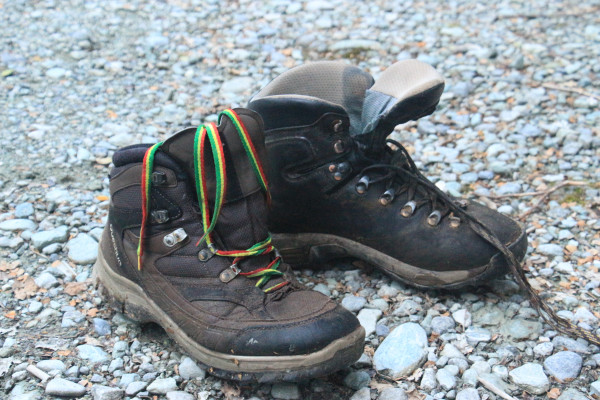 I thought about how that random boot came to be there. We didn’t meet anyone on the two days prior, and over the following eight days those we came across all had two boots. The previous owner was nowhere around. As luck would have it, somehow, just when my boot was retiring, a new one appeared for me!

And so, for the rest of the trip I wore that miracle boot, a different one on each foot, surprisingly comfortable. We made it to Martins Bay, and back again. Dolphins in Lake McKerrow, Fiordland crested penguins in the rocks at Long Reef, thousands of flowering Kowhai trees full of tui. Another trip full of amazing memories, and a new boot. How lucky.

What did I learn? This experience reinforced the position that your feet/footwear are probably only second in importance to what's between your ears (aka your brain and ability to think your way out of problems). On a long trip like this one we always planned for a number of situations, but even then, the unexpected can (and did) happen. We hadn't planned for a total boot failure! The ability to stay calm and think through the options was critical, and while my personal safety was never at risk it could have been had we not reassessed and changed plans. Of course, finding a new boot was pure luck, sometimes a little luck is all you need! Spare shoe laces and duct tape are a must!

The Hollyford Track is closed due to extensive storm damage. Stay up to date by checking the DOC website.