For even an extreme adventurist with decades of experience, a 1700km 55-day kite surfing, climbing and bitterly cold trip across Antarctica can teach even the best a few lessons.

The NZ Mountain Safety Council chatted with Kiwi ski guide Mark Sedon about feelings of isolation, mental stability and lessons learnt from an Antarctica adventure that is currently on the big screen in New Zealand as part of the Banff Mountain Film Festival World Tour.

Mark Sedon thrives off adventure: he’s climbed Mt Everest, is one of few Kiwis to climb the Seven Summits, and he’s been on 13 adventure trips to Antarctica, just to name a few, but his latest trip there in late 2017 as the cameraman for the film ‘Spectre Expedition – To The End of the Earth’ was one like no other.

All his adventures have a crucial aspect in common: mind set.

“It was such a long expedition, and we were about five days into it and getting our asses kicked [by the weather] and we weren’t getting as far as we thought. I just said to everyone, ‘concentrate on the problems right in front of us and not worry about the 60-day programme’, and that mind set helped us get through it,” he said.

Mark, from Lake Hawea, was called up last minute to join the team alongside British team leader Leo Houlding and Frenchman Jean Burgon, both had been preparing for five years.

“My experience from climbing Mt Everest is you don’t worry about the top. You think about what’s right in front of you and any problems at hand and push the rest to the back of your mind, and just try and do everything one step at a time.

“You know, life in general can be quite daunting if you try and think about everything, you just worry about today and don’t worry too much about tomorrow.

“When we went to climb the mountain that we’d flown for six hours then kited for 18 days to get to, we felt super isolated and knew we had to go another 1500km to get home again, so felt really out on a limb.

“Out on the mountain, it was the most isolated feeling I’ve ever had.” 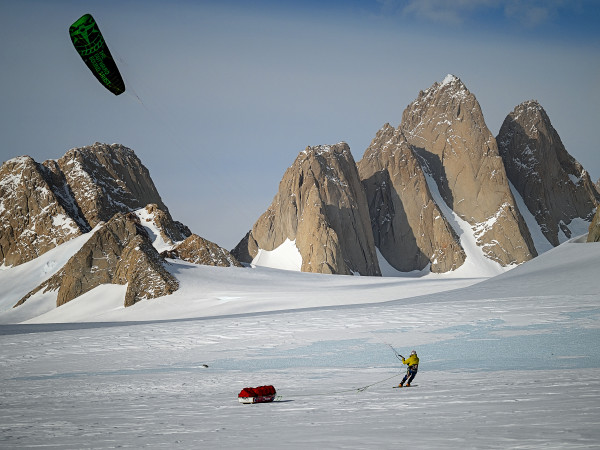 Mark said they were really tested, and more often than not it’s mind set that can catch you out.

To be rescued for even the smallest of injuries would be up to one weeks’ wait, he said.

“Any injury would be at least a week to get rescued because they can’t just fly and pick you up, it’s so remote they have to load up two fuel cache just to get to you.”

The amount of experience Mark had under his belt, he felt pretty prepared for the expedition.

“The safety skills I used were ones that had just built up over a life of climbing, skiing, kite surfing, just living in the outdoors,” he said.

Over the years he admits he’s learnt to be “just crafty at keeping warm”, he said.

Mark Sedon backing up the day’s photos in their tent. PHOTO/MARK SEDON

“Little tricks like not overheating so you don’t sweat, staying cool - not cold or hot. Pulling my fingers out of my gloves when standing round because hands in pockets is much warmer than in gloves, or always wiggling your feet and toes the whole time.”

The group battled with the possibility of frost bite for weeks as the temperature plummeted to minus 60 during the first two weeks.

“We just always had to pay attention and not put something off. If you were cold you would have to stop and do something about it. That’s quite typical in Antarctica, but in New Zealand you can keep going if you’re a bit cold or hot.”

Despite the bitterly cold weather and feelings of isolation, Mark had another concern.

“Funny enough, one of my biggest concerns on the trip was the thought of not showering for two months. . . not many people really have that issue.

“I guess I learnt on the trip that it doesn’t actually matter, you don’t get that dirty and the body seems to clean itself - you can do fine without a lot of the comforts in life.

“And you don’t smell each other; you just smell yourself in your sleeping bag,” he laughed.

While Mark packed six pairs of underwear for two months, he only used four.

Mark had “quite a full-time job” of filming the entire trip.

“Sometimes I’m just trying to survive and to get the camera out, well,” he laughed.

“It was really hard to film and kite ski, because, the kite is a bit like tying yourself to a race horse and then slapping it’s backside and trying to control that, and then to get the camera out and film was really intense and difficult, and the cold, any bare skin would freeze in 30 seconds, so having to do stuff with big gloves on was a challenge too.”

“There were some days there when we were going down wind and there was a foot of powder, and it’s super quiet and you’re just kiting along there with your sunnies on and you have music playing, and I just had this big grin on my face for hours.

“You’d think that the Antarctic plateau is flat and boring, but when you’re down there the aspects change, the lights and the colours, and it was one of those magical experiences - it’s very hard to find that, that isolation and the feeling of ‘this is wicked’,” Mark said.

The film ‘Spectre Expedition – To The End of the Earth’ is part of the Banff Mountain Film Festival New Zealand tour. To buy a ticket and read more about the festival.