For a Christchurch father, hiring a Personal Locator Beacon (PLB) for an overnight tramp with his sons was “the single best decision” he made. The father of two shares his recount of the weekend’s decisions and what led to activating the PLB.

I never thought that I’d end up using a Personal Locator Beacon (PLB) on the first ever trip that I carried one, but I did, and am very glad to have done so!

Over the Level 4 Lockdown period, I had been promising my two primary school age boys that I’d take them on an overnight tramp after the winter, so when Labour weekend was near we made our plans and prepared our gear. While they had been on plenty of day hikes, this would be their first “proper” tramping experience, complete with staying in a hut overnight.

I had heard that Macpac stores hired out PLBs, and since I would be taking two young boys into the hills for the first time, I hired one for our trip. I had never carried one before, as I had never been in a situation where I thought I needed one, and the cost of purchasing one was prohibitive. Hiring a PLB was a very straightforward process, and looking back that was the single best decision I made all weekend.

We had planned to go to either of two huts, with Pinchgut Hut up the Okuku Gorge being the preferred option. There is a river crossing at the start of the track, so I had been checking the weather forecast and river levels during the week before. There was some rain forecast for Monday night, but I wasn’t too concerned as I’ve been up that river a handful of times before, and the various weather websites only predicted a little rain.  The river levels had been very low and stable for the preceding weeks, so it looked good. However, there’s still nothing like seeing it in person, so I agreed with my wife that I wouldn’t make the final decision until we saw the river and weather on the day. If I judged the water level was too high, or there were rain clouds looming overhead, then I would have changed plans and driven further south towards Hut B. Once we got to the river at the road bridge it was very low, so I texted my intentions and confirmed our route with my wife. This was mistake #1.

The Okuku Gorge area where the tramping party of three were.

The river crossing was less than knee deep, and quite refreshing in the warm overcast conditions.   We had an enjoyable couple of hours walking up the river through the beech forest, and we made good time and reached the hut well before dinnertime. After dinner time it started spitting, but that didn’t stop us lighting a campfire outside and toasting marshmallows for dessert.  We went to bed early, and while I knew it would rain overnight, I still wasn’t worried. That all changed in the night when I woke at around 4 am and spent the next couple of hours wide awake listening to the torrential rain on the tin roof. I now started to worry as this was a LOT of rain.

By morning the rain had passed on, and it was only dripping from the trees, and while the creek at the hut had risen a little, it was still clear. The temperature had dropped overnight, so after some warm porridge for breakfast, we put raincoats on and started the climb back up the hill.

Despite the rising river, the walk out went well, although the track was slippery in places from the rain. We made it back to the river crossing in good time, and then I had a big shock. While we’d been walking that morning, the river had continued to rise, and it was now very discoloured and thundering along, and there was no way that we were getting across.

I was carrying a tent and spare emergency food, so we were prepared in case we had to camp out for another night. However, mistake #2 had been arranging with my wife to raise the alarm if we weren’t back by that evening. We had no cell phone reception at the river crossing, so I couldn’t tell her that we were ok, that we would camp out overnight, and not to worry.

So I told the boys that we’d have to do some problem solving. I pulled out the map, and showed them the forestry tracks that ran along the river on our side and proposed that we’d walk a km or so to get to a higher point. The plan was to see if the river was crossable down below the gorge where it spreads out across the braided river bed, and also see if we could get cell phone reception higher up. 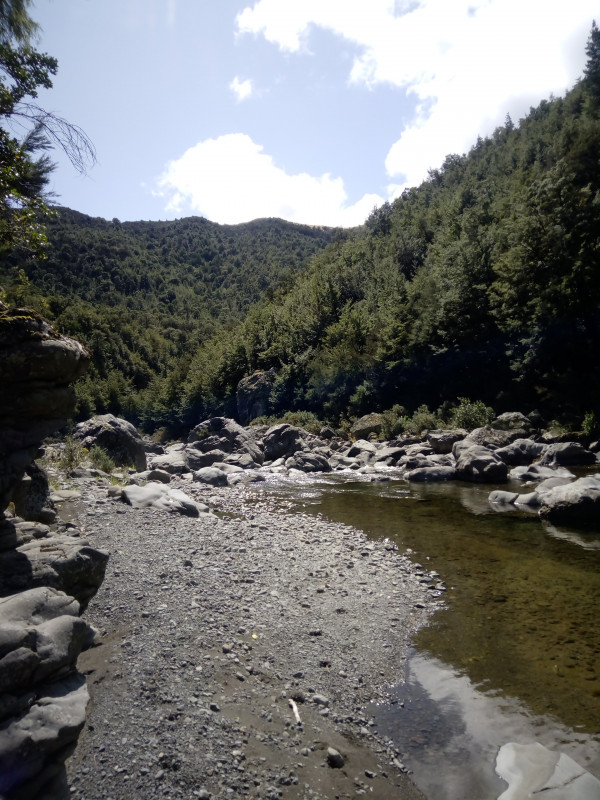 When we got to the high point, I suddenly realised it was now crunch time, and that I had to start making good decisions. The boys were getting really cold and tired and rain showers kept passing through. So, first things first - we found shelter under some trees, put on woolly hats and extra layers beneath our raincoats, sat down and ran through our options. We couldn’t cross the river at the ford, we couldn’t get cell phone reception at the high point, and we couldn’t cross the river further downstream as it was still too high. The boys were not able to walk out down the forestry tracks to the road end as that was at least another 8km and there was no cell phone reception there either. Looking at the river I doubted that we’d be able to cross next day either, even if we did camp out. (In the end it took a week for the river to drop back to its pre-flood level!)

As I stood there, I realised that we were stuck, and that I needed help. I had to face the fact that I had gotten my boys into trouble, and that I couldn’t get them out of it. It dawned on me that it was inevitable that the rescue team would come, it was just a matter of timing. If I waited it out then my wife would raise the alarm that evening and they’d be searching in the dark. Alternatively, the shop staff would raise the alarm in the morning when the PLB wasn’t returned and the chopper would be searching for us the next afternoon. Seeing as we were cold and tired and it was still raining, I decided that the best option was to raise the alarm and get the chopper out that same day, with good light.

It was still a hard decision to activate the PLB, as I was very aware that when I pressed the button, a huge amount of resources would be diverted from important rescue work to come to our aid.  However, we did need rescue, and I could see only downsides of not pressing the button, so I activated the PLB. This came as a great relief, as it was now out of my hands, and help would be coming.

That done, I got the cooking gear out and got some warm food and drink into the boys. Within the hour we heard a chopper coming up the river, so I got out from under the trees to wave at it as it came past. It couldn’t land where we were due to the trees, so it disappeared from view to offload some gear across the river before coming back. In short time, a paramedic winched down, established that we were not injured, and told us the plan for winching us off the side of the hill.   Two trips later we were all safely landed across the river, and I got a lift from the local farmer to get my car.

They say you learn more from your mistakes. I’m pretty embarrassed that I put my boys into danger on their first overnight tramp and that I needed to get rescued off the side of a hill. On the plus side, taking a PLB along was the best decision I made that weekend. I also think that activating the PLB was a good decision, even if we weren’t in a life-threatening situation (yet). While we were being rescued, I was told that too many people either don’t carry a PLB, or continue to make poor decisions which only makes a bad situation even worse.