Prep is key for father and son’s epic adventure

After completing New Zealand’s Te Araroa trail, father-son duo Dave and Baxter Murray give the NZ Mountain Safety Council an insight into their five-month 3000km adventure walking the length of the country.

Tackling 3000km is no mean feat for anyone, let alone for a 14-year-old, and teen Baxter Murray took it in his stride. The father and son pair, Dave Murray and Baxter, clocked off from the Te Araroa trail in Wellington on Monday. Despite the interruption of Covid-19, the pair were determined to complete the last two weeks of the trail from Whanganui to Wellington.

They launched into the trail at Ninety Mile Beach in mid-October last year and descended into Bluff in March, only days before Covid-19 crept into the country.

They had intended on returning to Whanganui to complete the final section that they delayed until the end. However, Lockdown Level 4 halted those plans, forcing them to wait until the most recent school holidays - Baxter had already taken two terms off school for the adventure of a lifetime.

“I was gutted – you did just want to finish it, we were on a roll and the fittest we’d been, so to stop and then just wait for about six months before we carried on again was disappointing,” Dave said.

Hailing from Wairarapa where the Tararua Ranges are their stomping ground, the Murrays were already keen trampers.

They began prepping for the 3000km adventure about 18 months in advance, mainly by practicing road walking, but despite the training, “you’re still nowhere near fit enough when you start”. 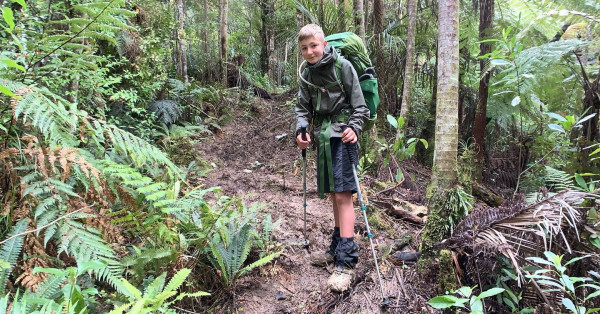 Their biggest day was a 12-hour stint walking 42km from Hamilton to Mt Pirongia, with a coffee break at Whatawhata.

“We probably went over-prepared, but I may have done it differently if I had just been myself, but when you’re taking your kid with you, you want those insurance policies in place,” he said.

Dave carried their alpine tent, a gas cooker and cannister, the food, and a Personal Locator Beacon, while Baxter carried the technology and a spare cannister, and each carried personal belongings.

Despite having all the correct gear, they only walked in five days of rain, “and the rest was just glorious”, Dave said.
“But when you have the right gear, the weather doesn’t really become an issue anyway,” he said.

They experienced a range of conditions from overnight lows of –2 degrees and scorching 30 degrees plus where they raced between shaded sections to avoid the sun.

The trip was not a huge mental battle, only on a few tough days did they almost pull the pin, they said. The big days set a benchmark for future tough days, Dave said.

“Once we got through the Richmond ranges everything seemed a breeze after that,” Dave laughed.

Dave got Baxter to sign a contract agreeing to ‘stick it out’ for six weeks, and after that, if he wasn’t enjoying it then they would pull the pin, he said.

Dave did this because he’d heard the first two weeks were notoriously the biggest battle, and he wanted to get past that point.

“There were a few days where Baxter tried to pull the pin, but we just sat down and had a chat, and the next day we were fine.

“For me it was just for the adventure, so I was just having fun. But I just loved it, every day was a holiday, it was great.”

Dave’s favourite day was between the South Island’s Rakaia and Rangitata Rivers because it was easy walking and the views were stunning, he said.

For Baxter, he enjoyed “pretty much everywhere because it was always different and fun”.

They had mapped out a schedule of the trail, but early on they had to adjust it.

“Once we started I realised we were being a bit optimistic and had to dial it back a wee bit. And that was mainly for Baxter to come up to speed in the first month, like have more rest days and shorter walking days.
"You have to walk to your own pace, you’ve got to do what you feel comfortable doing, and if you try and keep up to someone’s pace, it doesn’t become fun anymore, so we just found our own pace,” Dave said.

After 3000km and five months together, a father-son bond can only be stronger.

“I found out a lot about Baxter, how he operates and handles things, but most of the time I forgot he was a 14-year-old and he was just a guy you were chatting to as we went along,” Dave laughed. 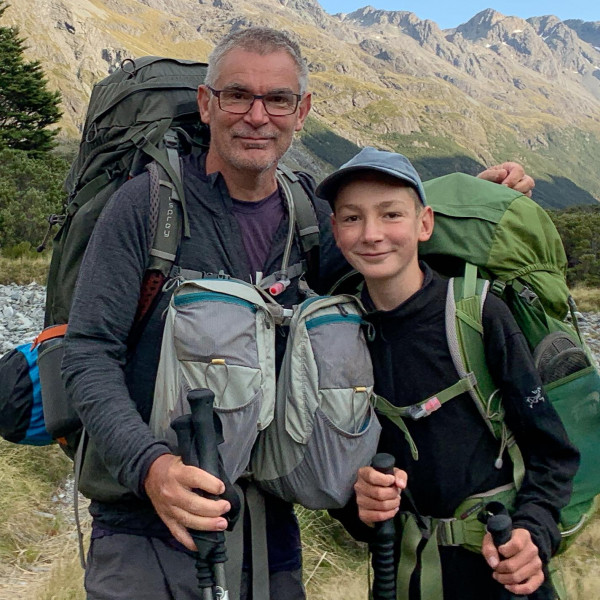 Baxter felt privileged, he said. “A great experience to see the country very few people will get to see,” he said after noting they only met three fellow Kiwis doing the trail along the way.

Te Araroa Executive Director Mark Weatherall said it was “wicked” that the Murrays were able to finally complete the trail this month.

The pair were two of 1200 people that ticked off the trail that season, October 1, 2019 to April 30 this year. Covid-19 has impacted the number of walkers this season with Weatherall predicting about 600 will complete it.
It’s uncommon for young families and children to complete the trail in its entirety, so Weatherall was stoked to follow Dave and Baxter’s journey.

“It’s really awesome, now they will always reflect on that walk and the memories they’ve made,” he said.