'Sometimes it’s not that easy to turn back’

Turning around, with your objective not completed, can be one of the most difficult decisions to make in the mountains. Finding the right balance of risk and reward is a fine art, often honed with experience.

For Alastair McDowell, a keen Canterbury-based mountaineer, finding that balance is an important element of every trip. Experience has taught him many things, and as a member of the New Zealand Alpine Team since 2016, he has learnt to identify his limits.

We caught up with Alastair after his trip up the classic Canterbury climb, Rome Ridge on Mt Rolleston, to learn more about the process of turning around and why it’s such a vital skill.

On a clear late July morning, Alastair, and climbing partner Rose Pearson, set off up the Coral Track on their climb up Rome Ridge. It was Alastair’s fifth trip up Rome Ridge, but it was to be the first time he had made the decision to turn around on it.

“We thought climbing conditions might be OK because we saw there had been lots of rain followed by low freezing levels to lock up the snowpack. Though we were still quite uncertain about the snowpack, especially for the descent of the Otira slide and we did take avalanche gear.”

With an early 5am start, the pair reached the bushline and noticed the chilly temperatures and the lack of snow at that elevation. 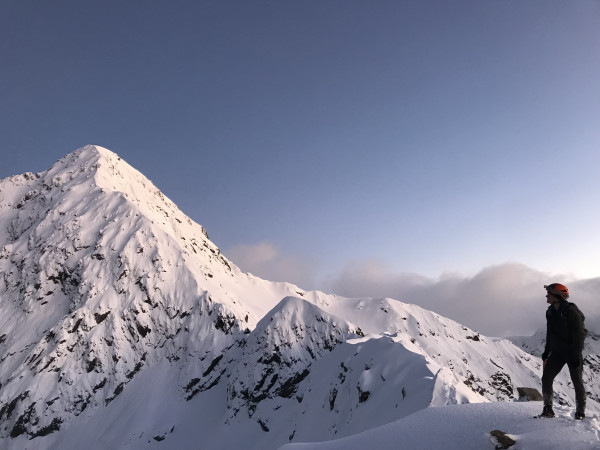 Rose Pearson at the turn around point looking up at Mt Rolleston Low Peak. PHOTO/SUPPLIED

“It was really interesting, every 50m to 100m in elevation gained the snowpack changed significantly. It was exactly what the NZAA avalanche forecast had described. The fluctuating freezing levels of the past storms had created many layers in the snow, and higher up fresh powder on top had insulated the wet base preventing a freeze, so we were post-holing down to rocks.”

The pair kept going, heading to the lower part of the ridge at an elevation of 1700m.

“Our thoughts were, ‘this is unpleasant, but not dangerous’, so we decided to keep going until it was dangerous, rather than just unpleasant."

They paused where the lower Rome ridge line gained the top of the Crow Valley before a section that requires a traverse of an open snow slope towards the “The Gap”.

“Crow Valley seemed to be quite loaded with fresh snow, and at that point we had realised it was more than just unpleasant, it was potentially dangerous too. Looking up at Rome Ridge, still a long way to go, a lot of unknown lay ahead, and the travel was slow and arduous.”

After assessing the conditions, the pair decided to turn back after only a few hours on the mountain.

“We were definitely happy with the decision to turnaround. We still enjoyed the morning out, and even got back to work by about 1pm. We’ll just try again later in the season.” 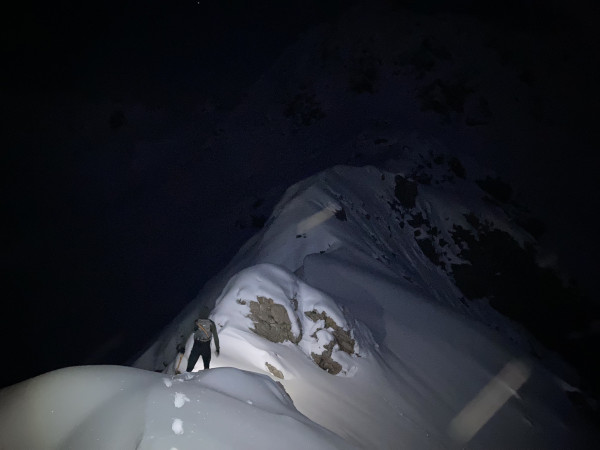 Traversing the lower section of Rome Ridge in the pre-dawn murk. PHOTO/SUPPLIED

“It’s always an interesting decision you make when going into the mountains because if you think about it, you have heaps to lose and not that much to gain, but we still go out there because it’s our passion.”

Alastair says trip research is where it all begins; studying recent and forecast weather and New Zealand Avalanche Advisory (NZAA) forecasts, all to help make a plan.

“At the point we turned around, we decided the reward to risk ratio wasn’t quite there and there wasn’t any point in continuing."

Rose and Alastair are good climbing partners who know each other’s risk tolerance levels and know that there is no ego that will come into play when making these types of decisions.

“It’s important everyone develops a mountain philosophy, and they think carefully about their motivations for going into the mountains and about what’s actually important. It’s not so clear cut as failure or success whether you reach a particular summit or not.”

His tip for beginner mountaineers is to compare what you think conditions will be like to what you observe on your trips.

“Every time you go out, try and create a picture of what it’s going to be like based on the weather – precip, wind, freezing levels… and then afterwards compare it to what you actually saw. Over time you get better at predicting when the conditions will be good and safe.

“When you’re less experienced you don’t have that wealth of knowledge, you do just have to go have a look. You don’t learn anything if you don’t try. But don’t be afraid to turn back.”

Note: On day of publish, Alastair had climbed Rome Ridge in perfect conditions, "the best I have seen over the years. Beautiful frozen snow and alpine ice. Patience always pays off!"

Thanks to Alastair for sharing his story. If you have a story from the outdoors to help others learn, we would love to hear from you#ShareYourStoryNZ

Continue your own learning