Early on the morning of Friday 12 February 2021, word spread of an avalanche incident involving two climbers on Mt Earnslaw. This is their story.

Cover Photo: The avalanche - taken shortly after the fall

One of the climbers caught in the avalanche, on one of New Zealand’s highest peaks, near Queenstown, admitted, “I thought I was done for”, as he and his climbing partner were carried away in an avalanche while attempting a summer climb of the 2830m peak.

The pair, who wish not to be named, have spoken exclusively to NZ Mountain Safety Council (MSC) about the events of their climb and the avalanche that very nearly took their lives. “This sort of situation is definitely not something to take for granted, I want to learn as much as I can from it”, says one of the pair. 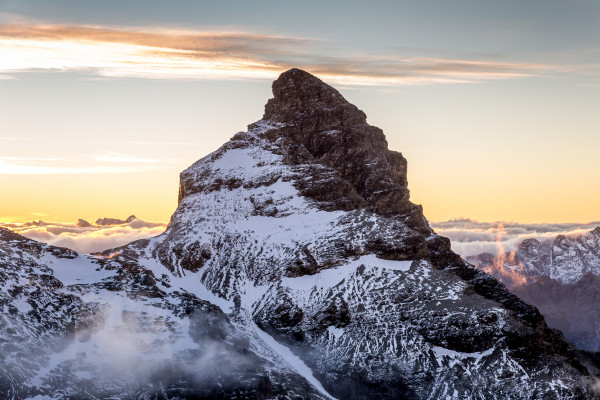 The pair left the Esquilant Bivvy Hut at 4.30am and scoped out the conditions for the morning’s ascent, they anticipated arriving at the summit between 8.30 and 9am, and then intended to descend via the normal route.

It was climber one’s, who spoke with MSC on the evening of the incident, first attempt time on the mountain, while the third time for climber two, climber one was pretty keen on summitting, so the pair were happy to turn back if they felt they needed to. Due to the recent snowfall they decided to attempt the south east ridge, as the normal route looked “very glassy and iced over”.

The pair crossed the Birley glacier, with the snow looking good and stable.

“Honestly, we were having a real good time.” 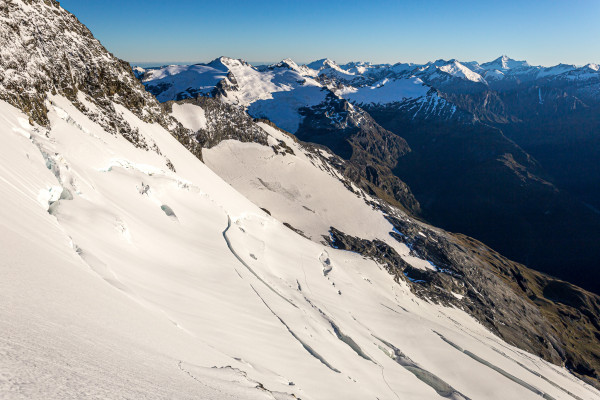 Birley Glacier – taken before the avalanche

“It was pretty much where it steepened to the summit . . . and we paused to have a look at the conditions.

“We were just standing there and the next thing we know the entire slope just collapsed beneath us,” he said.

“Next thing I know, we were trying to self-arrest, but it was impossible as the entire slope collapsed under us.

“That was the most scariest moment, just being completely out of control.

“I thought I was done for. Knowing that there were a bunch of crevasses beneath us, my initial thought was I’m definitely going to fall into one and get buried. After a few tumbles, I eventually somehow started to slow down, I think it was because the avalanche debris had slowed.”

"I remember seeing the snow around me going into the crevasse just there, amazed that I wasn’t going in there too - that’s miracle sort of stuff.”

The pair were told by rescuers that the avalanche was large, and climber one believed it was about 30m wide and 5cm deep, on a steep 70-degree slope.

Upon stopping he spotted his mate, who was badly injured, but about 10m away from him.
With only one bar of reception, he called 111, “I was so relieved I got the call through”.

The rescue helicopter arrived and transported both of them to Lakes District Hospital in Queenstown.

The pair both have experience mountaineering and rock climbing in New Zealand and overseas. But they both know how lucky they are to have survived an avalanche.

In retrospect there were some signs pointing to increased avalanche danger, that the pair say they missed.

With their level of experience, they knew about the potential of avalanches and the ideal conditions for them, “at 4am in the morning [it] was quite warm if I really think about it, so the risk of avalanche should’ve been more in our heads.”

“I already know in my head, avalanches are a very serious thing and are a big cause of fatalities - you can just be so oblivious of it until it happens.

Climber one suspects it was the ‘perfect storm’ of conditions for an avalanche looking back on it.

“The warm temperatures probably played a big part; I suppose it was warmer than we may have realised, and the recent snowfall as well - even though it wasn’t much and the degree of the slope. . . It was little things adding up.”

In addition to the avalanche conditions, climber one reflected on their decisions relating to emergency communication.

“But one of the dumb things” they didn’t take a Personal Locator Beacon or a satellite phone, despite one of them having both at home, but had difficulties activating the phone days prior so they elected not to take it.

“It’s almost the wrong mentality to have [not to take it], especially in these scenarios, you can’t get out of it, you just have no control whatsoever.”

The pair are adamant they want to learn from the event.

“Everyone can learn from these situations, and that's the great thing about mountaineering, it’s a community that manages risks and that can help everyone,” he said.

Climber one is looking forward to returning back to his family in Auckland where he can reflect on Friday’s near miss.

At the moment, the incident hasn’t put him off climbing, and he hopes it stays that way.

MSC Chief Executive Mike Daisley says, “climbers heading into the mountains where snow and ice is present face numerous hazards that they must manage, avalanche danger is one of these.”

“On a mountain such as Mt Earnslaw, avalanches are not frequent during the summer months but do occur every year."

Kickstart your avalanche awareness on avalanche.net.nz

Cover Photo: The avalanche - taken shortly after the fall