It’s the classic debate - bacon and egg pie with peas, or no peas? But what’s not up for debate in Josh Murray’s maimai is firearm safety.

“It’s no peas, of course,” says Josh who is getting ready to host his 7th annual duck season Opening Weekend with his friends on his farm near Fielding.

His mates come from a similar background to Josh, military and firearms instructing, so they are more than familiar with the safe use of a firearm.

“I use a lot of humour to get messages across so I don’t seem as overbearing. I don’t want it to be ‘my pond my rules,’ but at the same time, there’s definitely a standard to adhere to as far as safety goes,” he says.

Josh was in the military for 12 years before moving to Manawatu and becoming a NZ Mountain Safety Council Firearms Instructor.

He didn’t grow up duck hunting but says this has been in his favour as he has created his own positive habits around duck hunting and safety in the maimai.

“I brought in a ‘hot brews before booze’ policy, so in the maimai we are only drinking coffees and milos.

The catch at Opening Weekend is that many shooters only shoot that one weekend each year, Josh says.

“There’s a lot of messaging that has been passed on inter-generational, from uncle doing it this way and grandad doing it that way.

Generational skills passed down are invaluable and that includes the message that good safety habits around firearms are critical, making sure people see a safe way of shooting.

“Being in the tight confines within the maimai, you can’t really have anyone not controlling the muzzle and things like that, otherwise it just gets a whole lot more dangerous.

A habit cannot be formed only doing it once or twice a year.

“You can’t claim to be a proficient user of that firearm, just like with any skill,” he says. 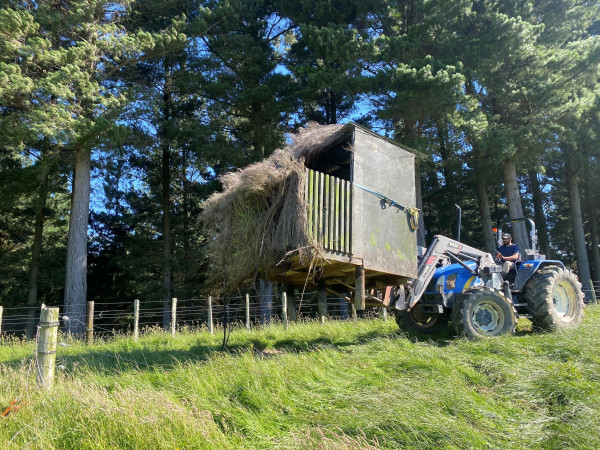 Shifting the maimai for a fresh perspective this season. PHOTO/JOSH MURRAY

Josh encourages everyone to refresh themselves on handling before getting to the maimai.

“My mate and I make sure we go to a duck shooting event prior, I know a few have been cancelled this year, but we usually go and shoot a few clays.

“This makes sure you’ve cleaned and put them together the right way, and the ammo you’re using is working and is cycling properly,” he said.

Upon moving back to the Manawatu in 2016, he fenced off a small pond that was once used as a stock dam.
“Once you get a good spot it becomes a long-term passion.” 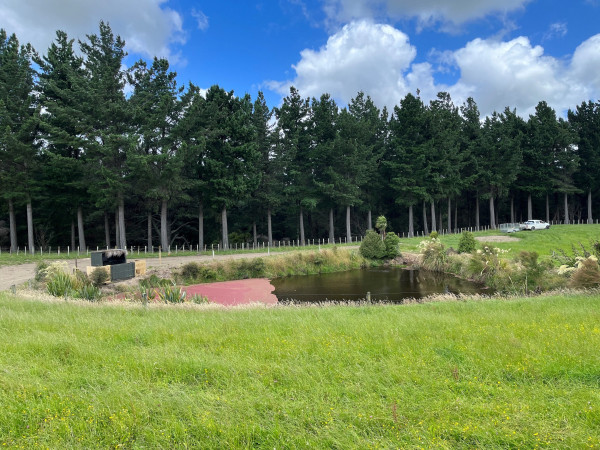 Josh Murray's set up on his Manawatu property. PHOTO/JOSH MURRAY

There’s a lot more to maintaining the maimai and pond than meets the eye. Over the years Josh has created a sanctuary of riparian planting which is a habitat for ducks and native birds.

A few months back, he and his mates decided to reposition the maimai to avoid sun strike on opening weekend, and then gave it a scrub up.

“It can chew up a lot of your free time,” he says.

The fencing on the pond at the 40m mark are a good indicator for him and his mates to know how close the ducks need to be for a clean kill.

“You definitely need to know your range and having indicators on the pond is key to success really. To get an efficient kill you will struggle to get a bird that’s flying by over 50m.”

For the Manawatu region, the limit has bumped up to 12 ducks per duck shooter this year, so for the four of them in the maimai, that’s a limit of 48.

He has welcomed messaging from Fish & Game seeing ducks as a resource which is shifting the attitude of some seeing them pests. It has changed the culture in duck hunting and earned more respect for the sport.

Josh reckons they will be lucky to reach the limit, but will give it a good nudge. He’s just hoping for wind and rain to lure the ducks to his well-prepared pond.

“But the limit shouldn’t be the indictor for success. It’s good to have and it’s bloody choice to make limit but duck shooting isn’t just about the birds, it’s about the entire process and spending quality time with good friends and family.”

We at the NZ Mountain Safety Council of course applaud Josh’s attitude for a fun and safe culture amongst friends in the maimai. Communicating safe practices and making these a habit amongst other hunters is always a challenge and it is up to everyone to uphold them and keep each other safe. It’s examples like this as well as the overall anticipation for the season, that we look forward to hearing successful stories and this important part in the hunting calendar for Kiwi hunters continues to thrive. Some great tips from Josh to take away:

Ease the pressure and enjoy the day! Thanks for sharing your story Josh, you can check out more of his hunting adventures on his YouTube channel.