‘This isn’t an easy story to tell. I made a bloody poor call’

Even decades of experience for the best of deerstalkers sometimes is not enough to guarantee good decision making. A South Island hunter shares their story about a life-changing hunt with NZ Mountain Safety Council. The hunter hopes that it will encourage fellow hunters to establish their priorities while out on the Roar this year. No matter the amount of experience, a poor call can be fatal.

“This isn’t an easy story to tell. I made a bloody poor call, underestimating the conditions, overestimating my own abilities, putting both me and my mate at risk. Leaving a young family and loving wife behind for the sake of an animal just doesn’t seem worth it. I have had close calls in rivers before and know all too well that bad decisions like this turn fatal very quickly. The mountains and rivers in New Zealand offer unrivalled opportunities and challenges for hunters, but they offer few second chances.”

The story goes... “He was one of those bulls that just wouldn’t budge. He was obviously pretty content over the river, throwing out the odd bugle. No doubt a cow or two tucked away close, and just letting the valley know he was the man.

We had just had a week of chasing wapiti further up the valley and were packing out to our pick-up a few hours away, when we first heard him. A quick discussion, should we go after him, ignore it, try and entice him onto the far edge of the river? We agreed it was likely a mature bull, given he was just not moving, no charging around like a young spiker for this guy.

We moved on a few hundred metres downstream, so we were directly opposite him, probably 300m as the crow flies - just a gin clear Fiordland river as the complicator between us.

Me and my mate were a bit frustrated, but far from suffering buck fever. We had seen and passed up plenty of animals for the trip, taking just one nice bull with the bow. But as always, keen to look at more. I moved 50m downstream, trying for that better angle to look into the bush for a glimpse of him.

But he wasn’t moving, a stalemate. I tossed up the options: walk away, keep bugling back and forward and hope, or get in closer. The river was typical Fiordland in the lower reaches, clear as gin, slow moving, deepish - the kind of place where good crossings aren’t everywhere, but surely someone experienced like me could pick my way across here. 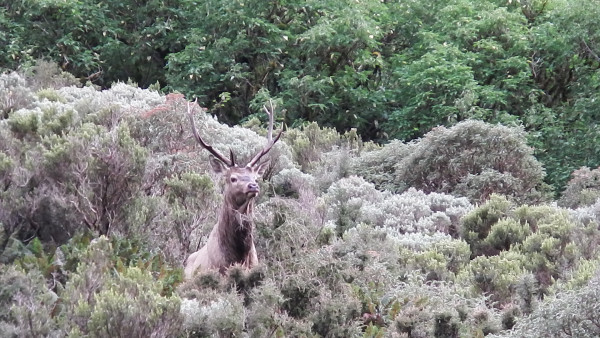 I came up with a plan, give it a go for a few metres, turn back if it’s too deep, but I should be able to bounce across, holding my rifle clear of the water. My mate was out of sight upstream still. I figured he would see me cross, so didn’t bother telling him my plan. I had a rifle while he had a bow, and we generally could read each other in these situations - one roar and one close in, so didn’t really think about talking it through.

I left my pack on the bank, popped a small knife in the front pocket of my light raincoat and slipped over the bank to the greasy rocks. At this point I was mentally prepared for a pair of wet clangers, but pretty confident. The mild taste of adrenaline pushing past good decision making. If I got a little wetter so be it, I would only be a couple of strokes back to the edge in the worst case.

That all changed after the first couple of steps into the water. Knee deep, then waist deep, then chest deep and then big trouble. I had really underestimated the depth, and also my ability to stay afloat in heavy boots, and a jacket with big pockets that filled immediately with water. Panic set in, rifle dropped and within seconds I was fighting to keep my head out of water.

Looking back, the scariest moment was becoming a member of the inside-out club - being inside the river and looking out through the surface above me. I managed a couple of bounces up to grab a breath of air and managed to yell out on one of them.  Hearing the call and splashes, my mate came sprinting through the bush and didn’t hesitate, diving in headfirst.

Luckily, I was still conscious when we got to the shallows, but shock and adrenaline really set in, and I was shaking on the bank, wet, cold and rifleless. My rifle was just visible at the bottom of the river, and amazingly after one more dive from my mate it too was recovered.

Who knows what happened to the bull, but he was pretty safe from us now.

The need to get moving and warm kicked in, and on some pretty quick reflections on what a bloody good mate I had, we walked on to the pickup, and the shaking slowly subsiding.”

Sharpen up your hunting skills this roar with our other resources here.

If you have tips and tricks to get the best out of your hunts, get in touch – we would love to use it to help others get roar ready. Send an email to Rebekah.Wilson@mountainsafety.org.nz.

Cover photo: A Fiordland River (not the one from the story). PHOTO/S.Gibson
Middle Photo: A 10-pointer wapiti from the hunting trip. PHOTO/SUPPLIED