Turning around can be the hardest decision to make

With the final destination in sight it can be easy to just push on, but Lena Blesin says it was the “right decision” not to attempt to cross the “strong and fast” river in a MacKenzie Country valley while tramping last summer.

It was a hot, clear December day near Lake Ohau when Lena and her tramping partner, Alessandro Farinella, set out on an afternoon tramp with the goal of making it to the South Temple Hut by sunset.

“As it was only three hours to the hut we started the walk in the afternoon and enjoyed every bit of it until we nearly reached the hut,” Lena said.

From their research, they knew there were a handful of river crossings, on their way to the hut that is nestled 7.5km up the Temple Valley in the Ruataniwha Conservation Park.

“We were told it’s easy and we don’t have to worry about that,” she said. 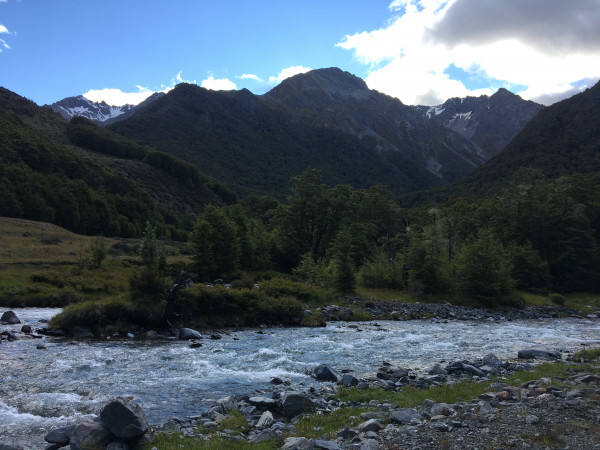 After walking for a couple hours and a handful of river crossings, they arrived at the South Temple Stream with the hut not too far away.

“Because the sun was quite low already it was hard to tell how deep the water was, so we threw some stones in there and it looked and sounded pretty deep.

“The stream’s current was also strong and fast,” she said.

She estimated the water was at least knee to hip height.

The pair discussed what they could see and spent about 30 minutes looking for a safe place to cross.

“After thoroughly assessing the river and discussing our confidence we decided to turn around and go back to our car even though that meant we had to walk back in the dark.

“That made the walk back quite tricky as well but we were prepared for this and had head torches and a GPS to help us.”

Despite being a hot summers day, the pair had carried with them warm clothing, waterproof jackets and a means of communication.

To walk back in the dark of the night was not how they imagined their evening would be spent but it was better than taking an unnecessary risk, Lena said.

"It was a great tramp, we both really enjoyed spending time outside and were happy about our decision to turn around. It was the right choice.

speak up and to turn around instead of trying to cross a river when not everybody feels 100% comfortable with it, because you never know what could happen,” Lena said.