Winter has officially begun so here’s Tom, our very own Alpine Partnerships Advisor with a few words to kick off the 2021 season.

Another strange start to winter. It was certainly an unusual sight to have five of our NZ Avalanche Advisory (NZAA) forecast regions on ‘High’ danger in May! But a realistic response to what was a massive weather event in Canterbury. As it turns out, the biggest hazard to would-be backcountry travellers was driving on the roads!

While snowpacks in Mt Hutt and the upper elevation areas of Aoraki/Mt Cook region have been off to a good start for winter due to that storm and others, many other regions have been left wanting far. But as I write, there’s snow forecast down to 300m in Wellington, so there’s hope yet! 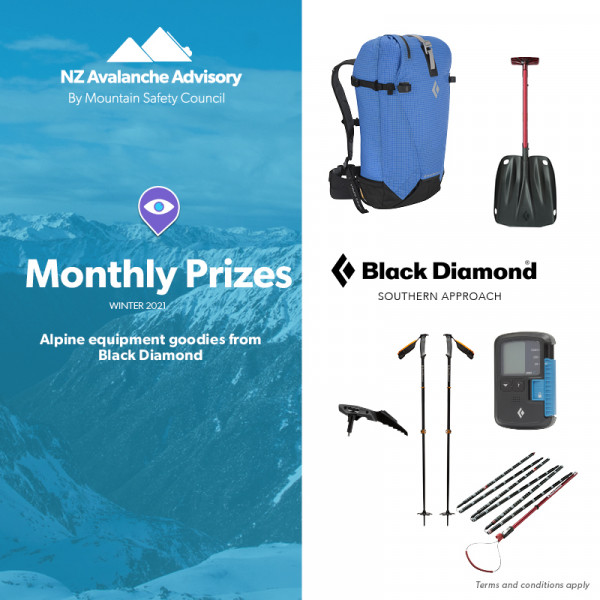 The NZAA is ready to go for another winter, and so is our Public Observations tool on avalanche.net.nz. There’s been an update to make it easier to view existing observations and filter your results, and we’ve also rebooted our Public Observations competition for 2021. Southern Approach NZ and Kingswood Skis have come back on board to support this year, so there’s plenty of awesome prizes (including a new set of Kingswood Skis and a Black Diamond Jetforce Avalanche Pack) for those sharing information with their community. We hope we will once again see more observations than ever before!

There’s also more to come soon, with our Avalanche Incidents in New Zealand in final review. Here you’ll be able to get insight into what avalanche incidents (involving people) looked like from 1999-2018. Keep an eye on our social media channels for this release. Speaking of, if you’re on Instagram, the @nzavalancheadvisory channel is a must follow for important updates, highlighted public observations, tips and tricks and other content relevant to any winter backcountry user.

As with any winter, if you’re planning on heading into backcountry avalanche terrain, our key message remains the same. Make sure you have got the training, have the gear, and have checked the forecast at avalanche.net.nz.

Additionally, something that has presented itself in numerous avalanche incidents and fatalities over the years has been a lack of assessing conditions when out in the field and recognising warning signs, despite having covered the above three points. Think of proper training and checking the forecast as tools that give you the ability to create a hypothesis about what you will see in the field. It’s then your job to test that hypothesis when out there to see if you can disprove it. Always be looking for signs of instability!

Have a safe and enjoyable winter everyone!

Get ready for the season

Want to get in touch with Tom or have a story to share this season? Get in touch.