Beware the sting: A Tramper's Guide to Avoiding and Managing Wasp Attacks

The scream came from the front of the group. About 25m ahead of me. It was immediately followed by someone yelling RUN, then more screaming, and crying kids. Instantly, panic set in, and the group of seven adults and five children fractured as some people ran ahead and others retreated.

Adults picked up kids, throwing them on their back or under their arm, moving as fast as they could away from a seemingly invisible threat. The rough, undulating, tree root covered track (the perfect recipe for rolled ankles) we’d been carefully making our way along only a few seconds prior immediately became of no concern for a family in flight mode as we sprinted away.

Unfortunately, we had disturbed a wasp nest, lying under a tree root in the middle of the track. Almost impossible to know it was there, until the first angry wasp emerged and set its stinger on us. As wasps do, their attack was immediate and relentless, with no discrimination between kids or adults. Wasp number 1 found its target, and the colony followed. What was an awesome day in the bush quickly turned into a nightmare scenario. Sting, sting, sting.

Wasps have no natural predators (in NZ), they do however have plenty of food (like the beech forest honeydew) and compared to Europe we have typically mild winters. These factors combined provide wasps with their version of paradise. Aotearoa has the highest densities of German (and common) wasps in the world. Through summer our beach forests can be found teeming with them. The beech forests at the top of the South Island have the highest densities of wasps in the world. Just take a visit to Nelson Lakes or Kahurangi National Park in late summer and the hum of their wings as they hunt through the beech forest almost drowns out any other sound, except for screaming kids.

Accidentally introduced in the 1940s, the German wasp (Vespula germanica) is native to Europe and northern Africa. They live in large colonies, and unfortunately for trampers they absolutely love building these just underground within beech tree roots, especially along or next to tramping tracks.

The venom from a wasp sting contains several toxins that at a minimum causes discomfit and pain at the site of the sting, right through to a hypersensitive or allergic reaction. As wasps live in colonies, they usually attack as a group, and it is not uncommon for trampers to receive multiple painful stings. Having suffered six wasp stings to my hands on a tramp in Lewis Pass several years ago, the memory was still rather fresh on this latest occasion.

Not only are wasps a huge annoyance to trampers, but they also hunt and eat vast amounts of native insects, and even baby birds. Their destructive appetites wreak havoc on the native beech forest ecosystem.

It has been estimated that in some beech forest locations there can be 10,000 wasps per hectare. This means the total biomass of wasps outnumber all birds, stoats, and rodents combined!

Wasp stings can be extremely painful, and worst-case cause anaphylactic reactions, regardless of the outcome they’ll be sure to ruin your day out in the hills, or like my family in this story experienced, put young kids off bush walks for the rest of the summer!

How can trampers avoid wasp nests?

If you’re heading out hiking or tramping during the New Zealand summer and early autumn months, especially in beech forests (and especially at the top of the South Island) you’re almost certainly going to encounter wasps.

Wasps love to make their nests in the tree root hollows throughout the forest, often this can be right on or next to the track. To avoid disturbing a wasp nest we recommend you:

It is also worth thinking about tramping in a long-sleeved top, and wearing pants, when in areas with high wasp populations. Covering your skin will provide some protection.

If you’re tramping in beech forests you can’t completely avoid wasps, but your best defence is knowing they exist and staying alert to the presence of wasps/their nest.

What should you do if you disturb a wasp nest when tramping?

Wasps only attack if they feel threatened. Standing on one will achieve that outcome quite quickly, and when one is angry and stings, so do the others.

Standing still and waiting (or hoping) they’ll leave you alone will become a very painful experience. Don’t delay, get out of the way! In my experience you’ll need to move a good 100m or more away from the colony site, and even then, be very careful about wasps that have attached themselves to your clothing.

Once you’ve managed to get away from the angry wasps you’re probably going to be facing an immediate first aid situation and need to treat someone who’s been stung. We’ll cover ‘how to treat a wasp sting’ below.

You’ll now be faced with a decision, carry on as planned (past the wasp nest) or turn around and go back. In some cases, you may have to carry on (like we needed to on our day tramp) and in that situation you will be face to face again with them. My advice is to wait as long as practically possible, at least a good 15 minutes, to let the angry wasps calm down a bit and return to their normal food hunting. When passing by them again, do so swiftly but without disturbing the colony or stepping on a wasp...there’s no easy solution here, it’s about taking great care and swiftly.

One alternative is to try and go around the site, if you’re able to do so safely. On our trip we had 7 children (as young as three) and the terrain around the colony site was not going to be easy going, if passable at all. 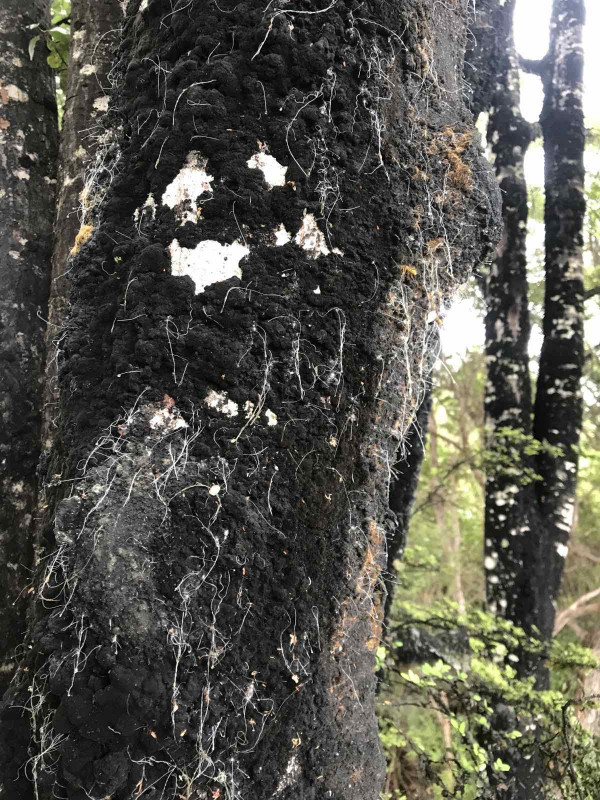 How do you treat wasp stings?

In my experience ignoring a wasp sting is a mistake. If you think you’re macho enough not to feel it, then good on you.

Wasps will sting multiple times, unlike bees who lose their stinger after the initial jab.

Treating wasp stings means being prepared for wasp stings. Your first aid kit is going to need to be stocked with some specific items, and a trip to the pharmacy for some antihistamine tablets added to your list of pre-departure tasks. Consider that fact, if someone has an anaphylactic reaction while you’re out in the bush, what are you going to do? Just because you’ve been stung once and not had a reaction it does not mean you won’t react the next time.

In your first aid kit you should include:

How to assess and treat a wasp sting:

Note: if you’ve been stung on/in/near your mouth or lips swelling may impact your ability to breathe. Immediately take an antihistamine tablet, apply antihistamine cream to the throat and sip cold water. Don’t take the risk, get out as soon as you can.

What is a severe allergic reaction?

Severe reactions need to be treated with adrenalin, to increase the hearts’ ability to pump blood and open your airway. This is where your EpiPen® comes in, as it is a self-administrable injection to the thickest part of your/the patients thigh.

An anaphylactic reaction may not occur immediately, it could be an hour or so later. Early signs to watch for include feeling sick, rapid pulse, tight chest, fullness in the throat, coughing and as things progress severe swelling, rash, low blood pressure (feeling faint), vomiting, cramps and feeling very unwell.

In this situation, your tramp is over, get to medical help urgently.

What’s being done to combat wasps?

Localised wasp control efforts have been underway for years. The Department of Conservation often leads these, as do local or regional councils. While baiting effectively reduces wasp numbers over the peak of the season, sadly, it does not appear to have any long-term impact on the abundance of wasps, particularly in beech forests, and needs to be repeated each year.

You may have seen the wasp bait stations along walking and tramping tracks, such as the one pictured below. 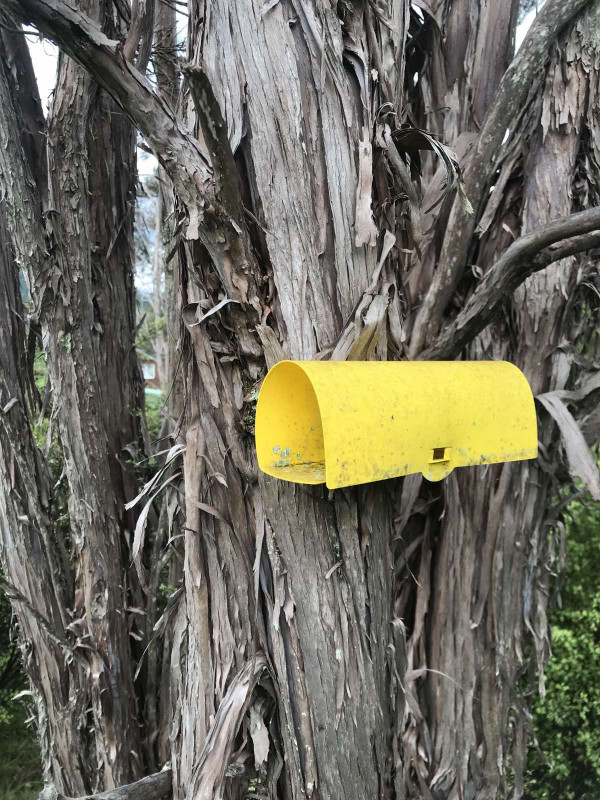 In February 2021 the Environmental Protection Authority | Te Mana Rauhi Taiao, approved the release of two new biological controls to combat wasps. The Tasman District Council (TDC) was approved to release a beetle and hoverfly parasitoid to mitigate social was populations. Fresh stock of a third biological control agent (a parasitoid wasp), that was first released decades ago, will also be released.

The release of one or more of these biocontrol agent species is planned to begin this summer (2022/23) at three privately owned locations in the top of the South Island, Te Tau Ihu. Co-design of release strategies as well as on going monitoring for each site is underway with iwi partners, councils, DOC, The Nature Conservancy and Manaaki Whenua Landcare Research (MWLR). Along with providing the agents for the first releases this summer, MWLR will be developing mass rearing techniques for each of the three agents to supply future releases.

Biological control is not expected to be a rapid solution to control wasp populations, but a long term, self-perpetuating control that will eventually work over a landscape scale. It may be a decade or more before we see any measurable impact on wasp numbers. Which is why it is so important to get the monitoring strategies in place as early as possible to inform the researchers what is working and what is not so methods can be modified and adapted.

***
This story was written by MSC Operations Manager, Nathan Watson.

MSC would like to thank Dr Bob Brown, Researcher, Manaaki Whenua – Landcare Research, and Richard Toft, Insect Ecologist, for their expert input and technical reviews of this story.