By the time you've packed everything you need for a hunt it is quite likely your pack will be pretty heavy. The most important thing is to make sure you pack efficiently, while not skimping on essentials for this year’s Roar. We talked to a keen South Island hunter about his packing experiences to help others get Roar Ready.

After going bush in Canterbury on a four-day hunt recently, reflects on what he packed compared to his experienced hunting mate and decides he can reduce the load but still take the essentials ready for his next hunt.

The pair headed out in North Canterbury in late November last year in the hopes of targeting reds, chamois and pigs.
“I packed my 65L pack and realised it was heavier than I ideally hoped for but figured the four days' worth of food would be gone for the walk out so made peace with myself,” Nigel says.

“I then met up with my hunting mate and did a mental comparison of his pack to mine - he is a vastly experienced hunter, whereas I am a late starter. Initially I thought his pack looked pretty similar in size, although possibly a 50L, so felt OK.”

The first day resulted in the pair securing a pig and a deer, so they decided to cut the trip short as they were at full carrying capacity.

“My pack was about 32kg (I had the deer, he had the pig) for the five-hour tramp and mountain bike return journey.”

Nigel had put in the training beforehand by walking up to 10km, 2 – 3 times a week with a 30kg pack.

But he says, “the walk out was hard going”, so after reflecting on his pack weight as a ‘less experienced hunter’, he has nutted out what he would pack for the next trip, and what would be left behind.

Approximately 15% of all Big Game Hunting injuries are the result of carrying a heavy load, so reducing your pack weight not only makes things easier for you, but it will also literally prevent injuries - A Hunter's Tale

Now a slightly more experienced hunter, Nigel has figured how to shave off 4kg from what he took on that hunt compared to what he plans to take next time.

Reducing the amount of muslin cloth, rope, as well as not taking his phone battery pack would cut down about 600g alone.

He decided to think smarter about his clothing, for example, by using lighter weight thermal layers instead of a big heavy mid-layer would allow better temperature control but reduce his overall weight and bulk, he says.

Investing in a lighter-weight rain jacket would've freed up some space and he estimates it would save him about 850g too.

Wiser food choices would save him about 500g in weight – such as choosing smaller portioned freeze-dried meals, taking pre-cut salami packets instead of the heavier roll and he now has a better idea of how much scroggin he needs – less than he thought.

Finally, next time he would reduce the number of bullets he was carrying, and reconsider taking the firearms suppressor.

However, Nigel says there were items he wouldn’t skimp on and that included his first aid kit, Personal Locater Beacon (PLB) rain jacket, head torch, spare batteries, and emergency shelter.

"I’d rather be safe than sorry.”

Top tips from an experienced hunter

Our own Hunting Partnerships Advisor and experienced hunter Adam Smith shares some of his top tips on how to pack efficiently for a hunt while ensuring the essentials aren’t missed out. 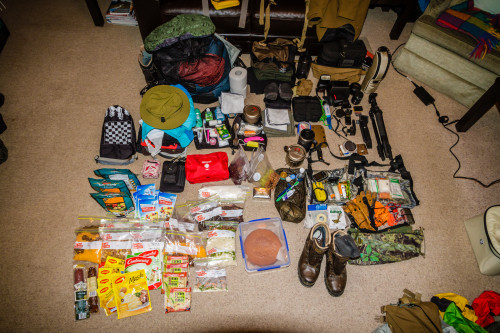 To lighten the load, take a smaller knife, or consider sharing binoculars with your hunting mates instead of taking a pair each, and the same goes with a rifle, he says.

Packing your pack for a hunt is similar to packing one for a tramp. Make sure the essential items including a waterproof jacket, torch, PLB, first aid kit, map, emergency shelter, food and water, and warmer layered clothes are accessible. Heavier items should be packed lower to help with balance on the body.

“This is shaping up to be a very busy Roar this year, so pay attention and don’t forget the essentials,” he says.

For more tips on how to get roar ready explore our website.

Sharpen up your hunting skills this roar with our other resources here.

Get your gear sorted in our Supplies section

If you have tips and tricks to get the best out of your hunts, get in touch – we would love to use it to help others get Roar Ready. Rebekah.Wilson@mountainsafety.org.nz.