Up where the tahr thrive | Cam's alpine adventure

We touched base with hunter Cam Forlong after a family tahr hunt along the Main Divide provided some lessons as another memorable trip for the books.

With the arrival of short days and frosty mornings, my hunting focus moves from deer to tahr. Hunting tahr in the alpine environment during winter is a great challenge and something I look forward to every year.

Matariki weekend presented a good opportunity to get out there with my Dad and brother. It would be the first time alpine hunting during winter for both of them, and although excitement levels were high, we put plenty of thought into planning and preparation.

The key points I focus on when planning a trip like this are:

The three of us ran through this list and made the following conclusions. Firstly, neither Dad nor Tom had experience in the alpine environment during winter. However, the technical difficulty of what we had planned was reasonably low and I felt it would be a good introduction for them. Personally, I have been on several trips into similar settings and felt comfortable teaching them the basic mountaineering skills they would need.

Our primary goal for the trip was to get out there as a family, experience some new things and just enjoy being in the magnificent scenery that our tahr thrive in. If the opportunity arises, we would love to shoot a bull tahr as well as some nannies to control the tahr population in the area.

In terms of gear and equipment there are some key items that I consider essential while winter hunting in the alps. Warm clothing kind of goes without saying but specifically its thermal base layers, gloves, balaclava, down jacket and a waterproof shell that will keep us comfortable and safe. Ice axe and crampons are also crucial on firm snow or ice, especially when on a slope! Learning how to self-arrest with an ice axe is best done on gentle slopes where the consequences are low, this is something Tom and I have practised several times so we have confidence should we need it in a more dangerous setting.

With all the planning done it was time for action. We depart Christchurch early in the morning and as we roll along the Canterbury Pains towards the Alps, anticipation is high! Dad is the most excited of all, he’s been waiting 64 years for a trip like this.

Four hours of driving followed by 15 minutes of flying had us sitting in the bottom of a valley only a stone's throw from the main divide. The sound of the chopper fades away, leaving us with nothing but silence and the humbling aura of staunch mountains, we can't help but smile as it soaks in.

Eager to get into some hunting, we head up the main valley stopping often as we go to glass the high faces either side of us. It is late afternoon before we spot any animals, then, a dozen tahr appear in quick succession, all of them in steep bluff systems 800m or more above us. Looking at them through the spotting scope we see two mature looking bulls, the stark contrast between their long blonde manes and their dark, almost black hind legs makes them really stand out from the others. Our options for approaching them were very limited, a long scree chute the only viable route to get within shooting distance. With 2 hours till dark, time is not on our side so a plan is hastily made. Tom and I would quickly climb up the scree and see if we could get within range while Dad guided us in from the bottom via hand signals. Nearly an hour of climbing had us near the top of the scree, we spot some nannies way above us on the skyline but no sign of the bulls. Our plan had sounded great when we came up with it but now that we’re up here on the side of a crumbly mountain it wasn't unfolding like we'd hoped. The target bulls are hidden from view now as we’re looking up at such a steep angle. We wait, hoping they will show themselves, but with darkness now rapidly approaching we call it off and retreat to the valley floor and then the hut.

On the second day we climb up a side creek which gives fairly easy access into some fresh country. Although we spot several mobs of tahr throughout the day, most of them are way above us on the skyline with multiple bluff systems between us, we don’t entertain the idea of going after them.

Tahr hanging out on the skyline as they do so often

Looking back down the valley from the top of a scree chute.

An updated forecast comes through on the InReach that evening confirming that the weather was closing in overnight, tomorrow we would have snow showers and low cloud. It's extremely useful having up-to-date forecasts when planning ahead for the next day.

As expected, we woke to wet snowy conditions. Tom and I pack the ice axe and crampons and once again climb up a large scree slope to where we anticipate the tahr to be. At last we find ourselves in the right place at the right time, a mob of 10 tahr are feeding on a face about 200m above us. Tom wastes little time setting himself up for a shot. Several things then happen in quick succession, the rifle goes off sending a shockwave back towards us, smoke from the shot briefly obscures the tahr from our view, a second goes by before we see the bull tahr has collapsed and is rolling down the hill towards us, celebrations would have to wait though as we see the tahr dislodge a bunch of rocks on its way down. We have about 5 seconds before a shower of rockfall is upon us. Tom has the advantage of being right beside a house sized boulder and was able to quickly roll in underneath it for shelter, on the other hand I am out in the open without time to reach such shelter. I crouched behind a waist high rock and held my half full 90L pack over my head and hoped for the best.  For the next 5 seconds projectiles flew past making a heck of a racket, I didn't dare peek out from my pack until all was quiet for some time.

With the dust settling, we exchanged looks of great relief followed up with a few words on how lucky we are.  A close call and not an experience I’ll forget anytime soon. In hindsight it was somewhat predictable that that may have happened as we were directly down slope of the tahr when taking the shot. Going forward I’ll be taking a second before shooting at animals steeply above me, making sure that some sort of protection from potential rockfall is very nearby.

A well earned bull tahr lay just up the slope from us, approaching him, his thick scent fills the air, the smell of a successful hunt. Sleet is blowing in with the stiff westerly but we are in no hurry, with a lightweight raincoat over our down jackets we are both comfortable. We relive the experiences of the morning as we take photos then skin and butcher the animal. 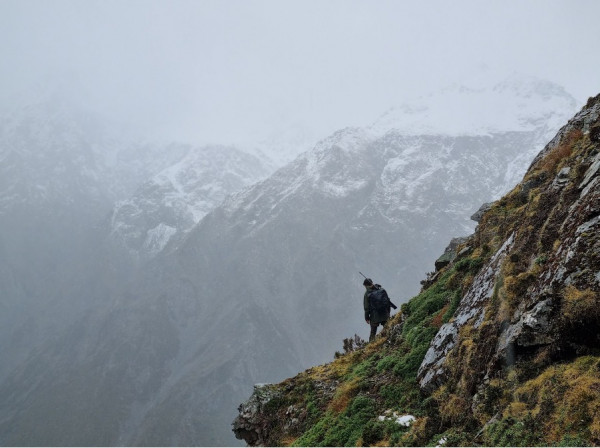 Tom sidling round to where his bull tahr lay.

We make our way back down the scree slope and back to the hut where Dad has the fire cranking and a hot brew on, a very welcomed sight. We sit around reflecting and stoking the fire as the weather deteriorates outside, life is good.

Our flight home arrived the following morning and it was back to the normalities of civilisation. Another memorable trip in the books, but the appetite for winter tahr hunting has not been fulfilled, it has only grown stronger. Until next time.

Prepare for the mountains

Alpine environments in New Zealand can be extremely hazardous to hunt in. This can be due to weather, loose rock, poor visibility, the sheer remoteness and of course - avalanche danger can be a factor all year round!
For any hunters looking to explore higher elevations or try out some winter hunting, we recommend considering an alpine or avalanche course to help better understand the risks and how to mitigate them and apply the techniques required for the essential equipment you are carrying.
ShareYourStoryNZ Hunting