Although this trip had been months in the making, it wasn’t until I'd left work on Friday afternoon and was waiting at the airport for my flight to Christchurch that the excitement started to brew, it was finally time.

We touched base with hunter Cam Forlong, who had shared his plans for his next Roar hunt on the West Coast with us, this is how it went.

After a couple hours’ sleep at my brother's flat in Christchurch we hit the road for the West Coast. This year Tom and Trent were joining Ronan and I for the annual roar trip, a 4-man crew is larger than we would usually have but the added social aspect was very welcomed.

By midday the 4 of us were sitting in a nice gentle saddle at 1500m, sun beaming down, and an endless sea of rugged tops and bush valleys ahead of us to explore!

Flat ground is hard to come by in these sorts of places, so we decided to make camp in the saddle as it gave us some reprieve from the steep topography surrounding us. This became known as “Saddle Camp'' and would be our base for the first 2 days of the trip. During our time there we were often clagged in by that typical West Coast fog, it would roll in through the afternoon and hang around till the following morning, very frustrating as a hunter as it makes it near impossible to spot any animals. We did, however, manage to get out for some glassing during the brief clear spells. 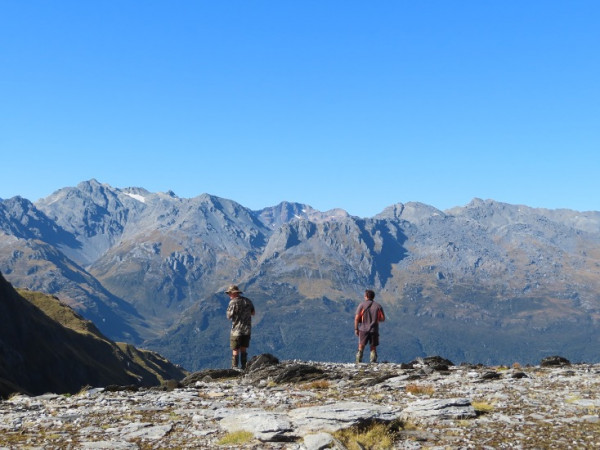 View from Saddle Camp before the fog rolled in

Tom and I hunted together out to the west of camp several big basins we hoped to glass down into. The steep terrain around us meant we were restricted to travelling via razorback ridges, while these are usually acceptable routes, they needed undivided attention to navigate, and, from a safety point of view, having a buddy was reassuring! 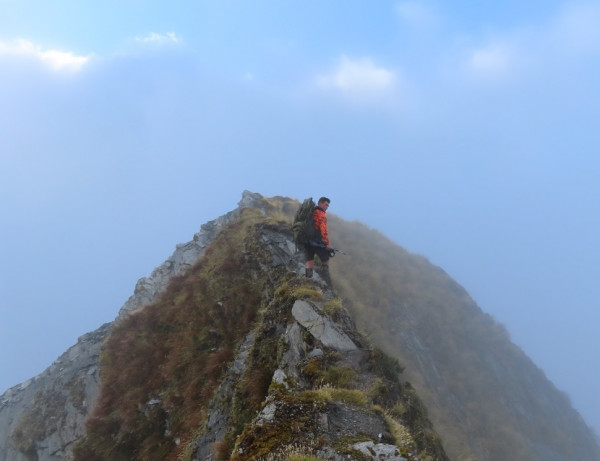 Tom walking a razorback as fog covers the mountain around us

We heard a couple of different stags roaring way down below us on the first evening, the fog kept them well hidden from us though. It wasn't till the morning of day 2 that the first deer was spotted. Ronan and Trent had dropped down a steep spur from camp, once below the fog they managed to get eyes on a very promising stag which was roaring just above the scrub line, his dark antlers appeared to have lots of points and excitement levels ran high as the boys set up the spotting scope to get a better look at him. Closer inspection through the spotting scope showed the stag had 14 points but his antlers were relatively short and narrow. He was also fairly small in the body, had skinny shoulders, and held his head quite high, all of which indicate a young animal likely 4-5 years of age. After lots of photos and discussion it was agreed that the stag was not a shooter for us, with still 5 days to go, it wasn't the time for shooting such a promising young stag. With any luck we will run into him again in a couple of years!

Day 3 dawned crisp and clear, we were eager to pack up camp and move onto the next stage of the trip which involved summiting a nearby 2000m peak and making our way down the other side into some fresh country. The climb to the summit was a bit of an unknown, it appeared there was a narrow route on the topo map, and I had read of people climbing it from this side before. We made slow but steady progress up most of the ascent until reaching a particularly steep spot near the top, we discussed our options and decided roping the packs and rifles up would be the best way to proceed. Although it took a bit of mucking around it eventually got all of us safely up and continuing on our way. 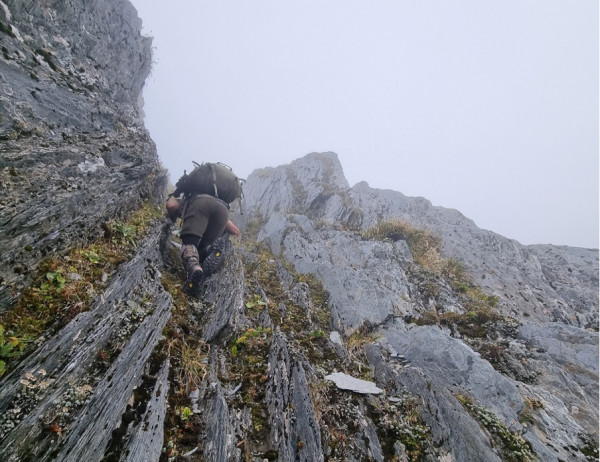 The particularly steep part, we reverted to roping packs up after this photo 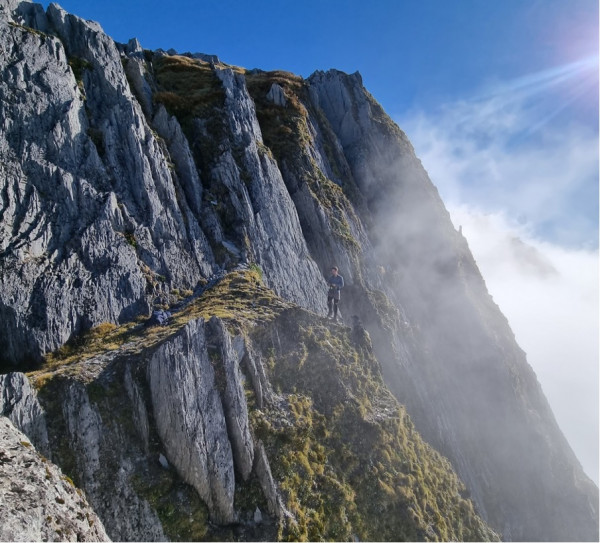 Ronan scouting the final 50m to the summit

At the summit it was calm and clear, the scenes were absolutely stunning, difficult to describe with words, we sat down in silence for a few minutes just soaking it all in. 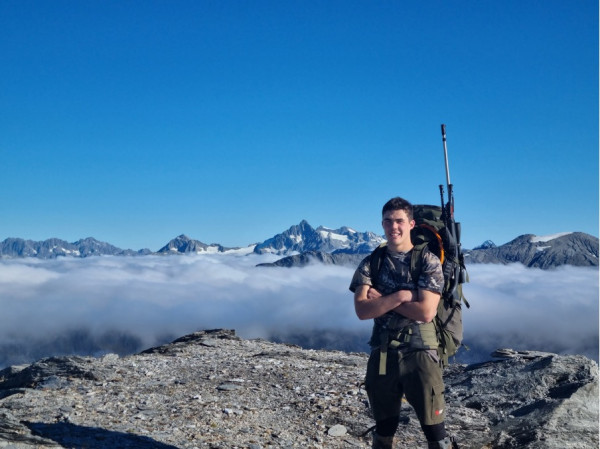 Tom on the summit

We must have been up there for half an hour taking photos and having lunch when a movement caught my eye, sure enough only 50m down below us a young bull tahr was sidling his way around the peak! I gave him a wee shout making him stop in his tracks, I was watching him though my scope as he aimlessly waved his head around wondering where the noise had come from, I then noticed that his eyes were a milky white colour, he was almost completely blind… I yelled out to him several more times but he couldn't make us out. It was at this point I decided some fresh meat would go down a treat over the coming days and this young bull was a good animal to take, I chambered a round, lined up on his neck and let the projectile fly! He was dead before he heard the shot. A quick butchery session was had before we began our descent down the other side to where we hoped some deer would be living.

It was late afternoon when we made it down to an acceptably flat camp site. A team effort was then needed to find water, we were running on empty after the day of climbing. It had been the driest West Coast summer on record and water sources were hard to come by, the best we could find was a small puddle in a dried up creek bed, not ideal, a quick boil was needed before drinking it. 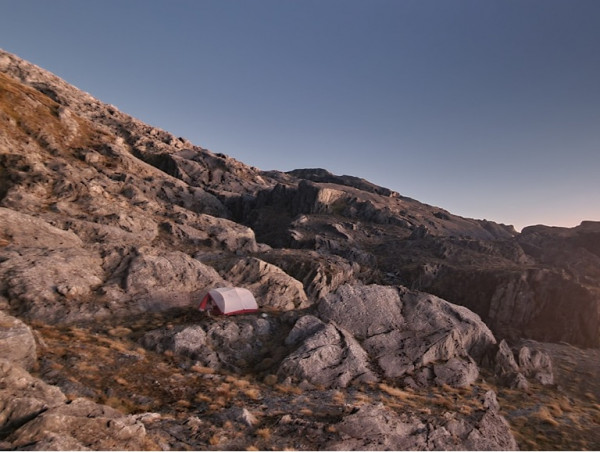 Camp 3 as the sunsets

As afternoon turned to evening, we had hoped to be glassing the bush edges down below but like clockwork the fog had rolled in, blocking the valleys from us. Although not a productive evening for hunting, we were treated to an amazing evening, the cloud level was just below our tents so we could see out over it. The contrast between soft wavy cloud and the harsh broken peaks protruding above it was magnificent. The golden warmth of the sunset and the company of great mates enhanced the experience further! Life was good up there. 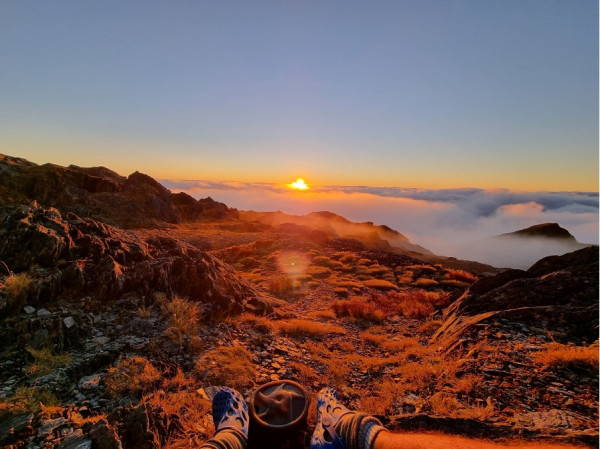 We packed up camp before dawn the next morning and moved further down the range. A couple hours of razorback travel with low visibility had us down on some more gentle terrain. Sitting down for smoko and a glass over the fresh country, it didn’t take long to pick up about 10 deer scattered over the face in front of us. Two stags were roaring back and forth at each other whilst chasing their respective hinds around. We captured some cool photos and footage, they were both young stags that weren’t in any danger form us. 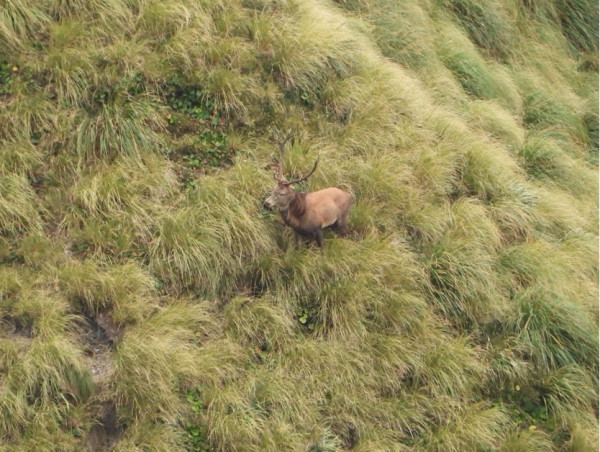 One of the stags roaring down below us

Rain and wind set in gradually throughout the afternoon, but all was well in the comfort of the MSR tent, we enjoyed sips of whiskey and played cards as the weather intensified. Drifting off to sleep that evening I was quite weary of the worsening situation outside.

At 4am we were all woken by a cluster of fierce wind gusts that temporarily folded the tent down on top of us, not a great situation to wake too! The tents were shaking violently and had lost their rigidity, it was clear that some of the pegs had pulled out.

During a lapse in the wind I got outside to inspect, I ran around trying to find the pegs and reinstate them but it was hopeless, they were coming out as fast as I could put them in.

The campsite we had chosen was nice and flat to sleep on but had poor drainage and attracted water during heavy rain, the result was mushy ground with no strength to hold pegs in. On top of this, the wind had swung round to the west which we were very exposed too, the little ridge we had tucked in behind was only protecting us from the south.

A quick discussion with the lads concluded that the best option at this point was to pack up and get off the tops, there was a hut down in the valley below we guessed about 5 hours walk away. It was 4:45am when we set off in horizontal rain and wind. Navigation was tricky at best but the crew stayed positive and we made it down to the hut at 9:30am, what a feeling! We sat around the fire drying out and eating for the rest of the day. 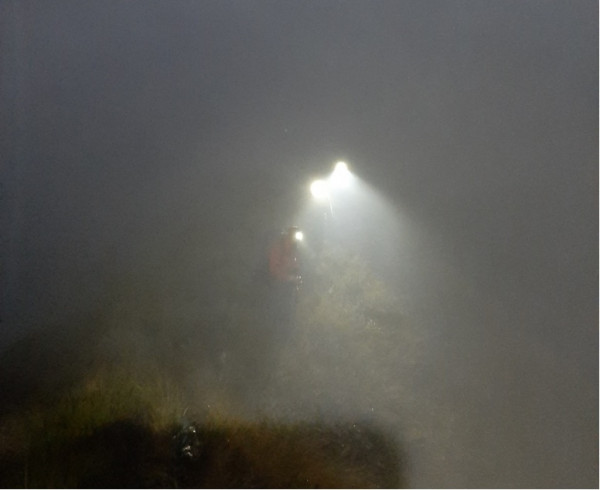 Cam, Trent and Tom en route off the tops at 5am

The final 2 days were spent hunting the bush and river flats as we walked our way down the valley. There seemed to be a reasonable number of deer in the bush, but the stags were only roaring intermittently making it difficult to get in close to them.

With Trent on the roaring horn, I did manage to stalk in on one stag, he was in a thick batch of bush so I wasn’t able to see him until we were only 10 metres apart. He stood roaring at me with a confused look on his face for a few minutes, again just a young animal with 6 points, safe from us. It’s an awesome experience being so close to a roaring stag in the bush! I’ve found that in situations like this I get much more enjoyment out of watching and taking photos than shooting it at first sight. 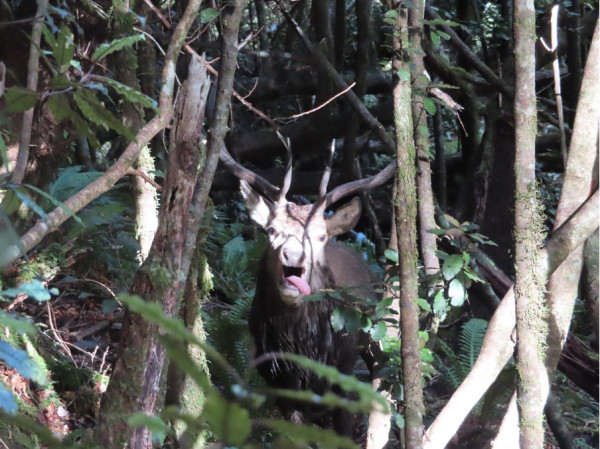 Close encounter with young stag in the bush

Later that evening the 4 of us were making our way downstream to a new campsite when we came across a hind out feeding on the river flat, a great animal to take for meat at this stage of the trip. The sound of the Rem Mag rang out through the valley and the hind fell over.

Butchery was quick and easy, and we decided to make camp right there on the flats. Now the final evening of the trip we made a decent fire down by the river and sat around cooking venison and reliving some of the encounters we’d had over the past week. Morale was high and the thought of civilisation tomorrow brought mixed emotions... With achy legs and a belly full of venison, sleep came very easy that night. 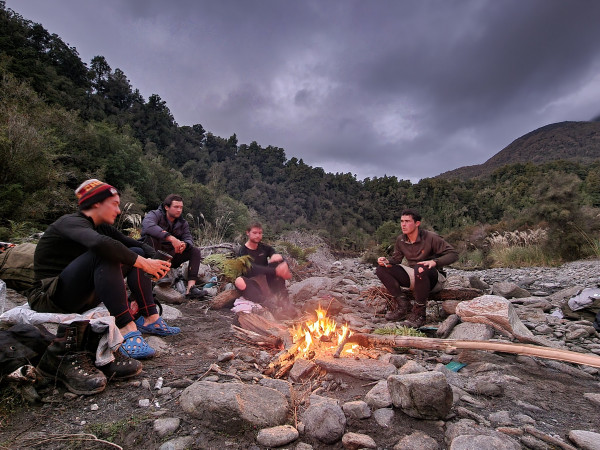 Final night around the fire

The morning dawned grey and rainy which drowned out hopes of a last chance stag. Our food supplies were critically low at this stage so the thought of a greasy feed in town was great motivation to get up. We had just a 3 hour walk back to the road.

Besides from a moderately large river crossing, the trip out was uneventful. Walking in the rain gave a good chance to reflect on the trip and begin scheming up a plan for next year. Reflecting back on the trip from the comforts of home, I have several take-away points to think about before my next trip.

Thanks for sharing your tips Cam!

As you can see there are plenty of places to pull your resources together and build a solid plan that suits your trip. We hope this has helped beginner hunters to learn about options out there, or even enlightened some more experienced folks to see what else there is to know about preparing for New Zealand's backcountry.

Read his other story about getting ready for this trip here.